Waking Up in the City That Never Sleeps

I am somewhat embarrassed to admit that I woke up our first morning in New York with butterflies in my stomach--that's how excited I was.  Mr. T&C had almost immediately reverted to his business traveler persona, which isn't necessarily a bad thing, so he was up and showering, checking on the weather, and finding where the newspapers and coffee were served.  I showered and dressed and then waked up the children, who protested only mildly.  We had a lovely breakfast at the hotel--fresh fruit and an assortment of muffins, scones, bagels, and croissants made by Sarabeth's, a popular UE establishment noted for its brunch and baked goods. 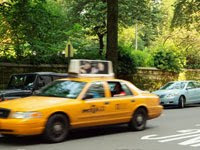 Being a planner, I had made a fairly detailed--but flexible--itinerary before we left home.  Our "map of the day," as Middle calls it, began with us taking the Circle Line Cruise around Manhattan. The cruise departs from Pier 83 on the Hudson.  Pier 83 is between 42nd and 43rd streets, and is also where the USS Intrepid is docked. Now, Mr. T&C and I were in agreement that we wanted to do as much walking as possible on this trip because it's the best way to experience the city. We had given the children a pep talk  on a couple of occasions about how we would be doing a lot of walking, and we made sure everyone had comfortable shoes. Mr T&C was firmly convinced that we could walk to Pier 83--a mere 54 blocks away!  Sometimes it is just best to keep quiet and let nature take its course, so to speak.  We were all full of vim and vigor, so we set out down 5th Avenue, past the Met, past the Guggenheim, past the Whitney, past the point of cheerfulness.  I may have neglected to mention that it was 35 degrees and starting to rain.  We hailed a cab for the remaining 38 blocks. 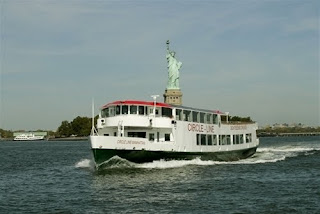 We made it, checked in for our cruise amid slight confusion, and then were told we needed to take the 11:30 cruise rather than the 10.  This would have been an opportune time for everyone to turn on me, but they did not, and as a result of their taking the high road, we had our first city adventure.  After asking one of the City Line employees about where we might find a drugstore (to buy umbrellas), we headed over a couple of blocks to 11th Avenue to a CVS.  Only we couldn't find the CVS, and we walked several blocks in both directions.  Providence intervened when I looked over my shoulder and spied a sign that said Salvation Army Thrift Store.  I pointed it out to the Mister, and he said, "why not, we're not getting any drier."  And off we went, up three or four flights of stairs in an old, old building and into another world.  We bought three umbrellas for a dollar each; and Mr. T&C found a Ralph Lauren black topcoat for $20.  As we were checking out--both amazed and aghast by our first NYC shopping experience, we noticed that the 20-something fellow in front of us was buying an armload of ladies' undergarments--the industrial strength type of products that feature lots of buckles and hooks and eyes.  I am thinking (hoping?) that the young man was an artist and planned to use his purchases in some sort of feminist mixed media work.  The Mister seemed to think there were other possibilities.


The cruise was excellent.  We were warm and dry.  Our narrator was funny and informative, and it was nice to sit down for a while, too.  We ate a very late lunch at Carmine's in the Theatre District.  Lunch was great, and the atmosphere was terrific.  We took a few photos in Times Square, when the rain began pouring in earnest, and our plan to visit the Empire State Building was scrapped for the day.  We decided to visit Macy's on Herald Square, which was mobbed, and, I am sorry to say, that the only miracle on 34th Street that day, was that the Mister and I were still speaking (barely) when we left that crazy retail madhouse.  We happened upon Grand Central Station and stopped in to admire the architecture and revive the kids with sandwiches and gelato before taking a taxi back to HW, where we collapsed. 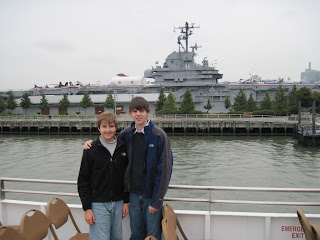 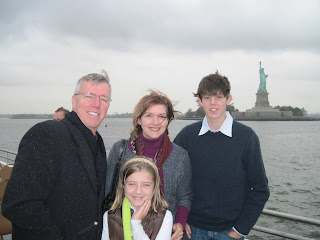 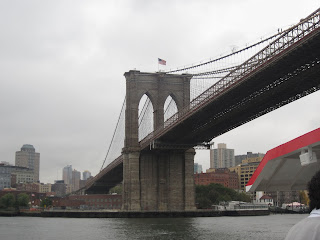 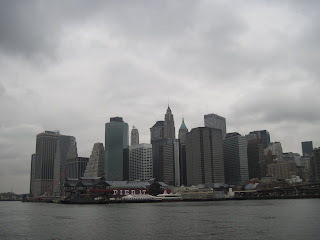 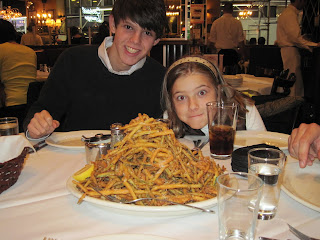 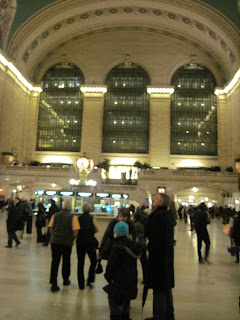