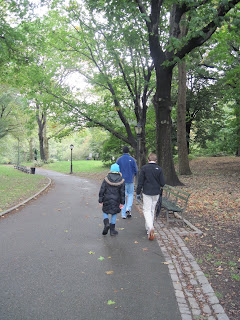 Started off  Friday with another tasty breakfast in the Carnegie Lounge of Hotel Wales.  From some hotel literature and my well-worn copy of Access: New York--a great travel guide, by the way--we determined that the Carnegie Lounge used to be called the Pied Piper Room and featured charming murals depicting scenes from "The Pied Piper" and other children's stories.  One of the front desk staff told the Mister that all the murals were removed about a year ago; it seems a shame.  Still the people-watching is quite good from this vantage point--lots of dog-walkers and UE moms pushing strollers and getting little ones off to school.  We left the hotel and headed out into the next day of our adventure, once again walking over to 5th Avenue.  The weather forecast was dismal--cold and rainy, but it wasn't raining yet, so we crossed into Central Park to see what we could see.  Despite the chill, it was wonderful.  We saw the Alice in Wonderland sculpture; the Hans Christian Andersen Ugly Duckling sculpture; and the sculpture of the famous Iditarod winner Balto.  We walked and walked, seeing the conservatory boat pond (Stuart Little), the Dairy Barn, Navy Plaza, and Wollman Rink. It was a delightful walk, and, before we knew it, we had walked almost 40 blocks! 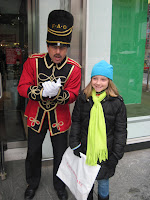 We stepped out into Grand Army Plaza, did a quick look-see in the lobby of the Plaza Hotel (Eloise could have been there!), and then into FAO Schwarz, where Little had a ball. She zoomed through the Barbies and all the pink stuff, meandered through the vast Lego store, admired the array of art and craft supplies, and finally lost herself in the Schleich toys. After quite a bit of deliberation, she settled on a lionness, a kangaroo, and an Indian for her collection. We settled up and then headed out into the cold. We stopped for a photo with the singing toy soldier at the entrance.Little just loved this place and did not want to leave. Until food came into her mind. When I planned this trip, food was not the focal point, primarily because restaurants are so expensive in NYC. I figured we would find some delis and diners and save the four-star restaurants for another time, and, for the most part, that plan worked well. We found a place called Red Stone Pizzeria on 5th Avenue across from Saks, and we all had a slice of our choice. (Actually the boys had a couple!)

Next stop, the Museum of Modern Art.  Mr T&C and the boys were doubtful about "modern art," but MoMA's collection is really art of the 20th century, so we saw Van Gogh's Starry Night as well as works by Cezanne, Hopper, Warhol, and Mondrian, Little's favorite artist.  We took in two floors of paintings and then we headed to the Architecture and Design floor, which features some of the coolest design in everything from toasters to clothing to furniture to cars. 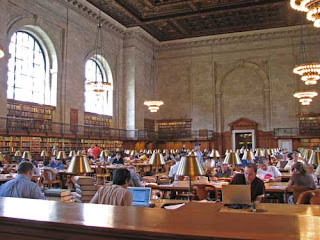 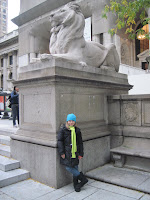 We walked a couple of blocks to the west and took a few photos by the amazing lion sculptures at the New York Public Library.  Then, with some encouragement from me, we climbed the well-worn marble steps to see some of the most beautiful architecture ever--gorgeous floors, paneling, moldings, murals, and furniture--and all of it used everyday.  The Rose Reading room was magnificent, and I was soooo curious as to what all those people were studying and reading about. 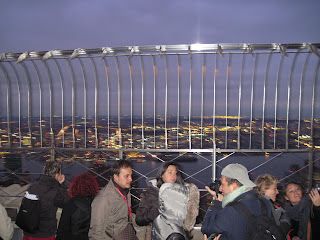 The day was still cloudy and cold, but we decided to take another shot at seeing the Empire State Building, so we walked down to 34th Street and hopped on the elevator and zoomed to the 86th floor observatory.  I have to interrupt myself here to say, if you are going to NYC and plan to see the Empire State Building and/or any of the major museums, get a City Pass.  You can buy them online at http://www.citypass.com/ or from Costco.  Admissions are close to half what single ticket prices are, and we didn't stand in any lines.  Occasionally, the City Pass entitles you to an extra perk, which was the case at the ESB, where we received the audio tour with our City Pass.  The tour was really interesting and informative--even the children liked it.   The view was amazing.  It was freezing, but, even so we didn't want to leave.  To see the city lights come on--first the bridges, then the Chrysler Building and 30 Rock--was really magical. 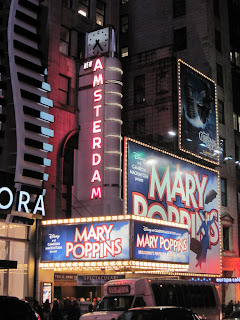 The lights of Times Square were beckoning, though, so we headed up to Broadway for the New Amsterdam Theater.  Mr. T&C had visited the theater just as the Walt Disney Co. began its multi-million dollar renovation--he was amazed at the detail of the restoration.  It is a beautiful building.  The show, although darker than the movie, was still terrific.  Little was beside herself.  To see Mary Poppins fly from the stage and over the audience was so exciting.

After the show, we walked a couple of blocks to Magnolia Bakery, where we each chose a cupcake to take back to the hotel.  Then we hailed a taxi just as the rain began to fall.  The day was "practically perfect" in every way.