Raise the Song of Harvest Home 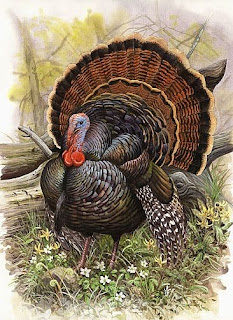 My parents are visiting us for Thanksgiving. They arrived Tuesday, which was less than 48 hours after our Florida friends returned to see the Clemson v. Virginia game. This time there were seven teenagers total, three adults, and one Little. It did not rain, but it was cold. I served chili for a late supper, and in the morning we had sausage, egg, and cheese bites, which were a huge hit.

Several weeks ago we were invited to take part in the Thanksgiving service at our church.  It is typically a fairly small service, held in the Chapel rather than the Sanctuary.  We each had a small part in a prayer; then Mr. T&C and I led the responsive reading of Psalm 92.  Finally, Big led the Apostle's Creed before the Benediction was given.  It was an honor to be part of this time of worship, and I think that this service will become a part of our Thanksgiving tradition.

In 15 years of marriage, I have made Thanksgiving dinner 13 times.  The largest crowd was 18, and my brother-in-law did deep fry the turkey that year.  So, I have roasted 12 Thanksgiving turkeys and a few Christmas ones as well.  I have rubbed them with olive oil, with butter, and with various combinations of herbs and wine.  I have stuffed them with onions and lemons or with apples and onions.  This year, I decided to try a dry rub.  So before we left for church, I rubbed some butter over the bird, and then lavishly patted it down with a mixture of brown sugar, paprika, and salt and pepper.  I stuffed it with onions and slid it into the oven.  We returned home about two hours later, and the house smelled divine.  Half an hour later, I pulled the turkey out to check it, and it looked perfect!  Temperature? Perfect.  So I covered it loosely with foil and left it to rest while I finished the remaining loose ends.

At last, all was ready and we sat down to dinner.  After a few words of gratitude around the table and a prayer of Thanksgiving, Mr. T&C began to carve the bird.  He was eager to try some techniques he had seen Tyler Florence use on the Today show.  He plunged the tip of the knife into the crispy brown skin, but the knife didn't penetrate.  He aimed a bit farther down, thinking he had hit breastbone the first time.  Again, nothing.  So, we whisked the turkey into the kitchen, where I discovered I had roasted it upside down!  (Did I mention I had a terrible headache before church this morning?)  We flipped that bird over, and sliced him right up.  Oh, it was a mess and all the good, crispy caramelized sugar skin was on the underside, but the turkey itself was tender and moist.  So, I am planning to try, try again.