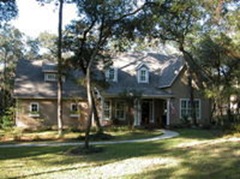 Hmmm.  I have to say that taking part in a virtual house tour has brought back some funny memories for the Mister and me.  You see, several years ago, when we were living in Florida, the Mister and I were invited to be a part of a real house tour--as in people pay money to see your house and, in our case, five others.  The tour was an annual fund-raiser for the Women's Fine Arts Committee of our little town, and because I knew someone whose daughter had received a music scholarship from the committee, I felt like we should do it.  More accurately, that was the excuse I used as to why we were doing it.  In all honesty, I was thrilled to be asked and just as thrilled to be able to show off our house.  A few years earlier, the Mister and I had worked with a terrific architect and a top-notch architect/custom home builder to create the home where we fully expected to live out the rest of our lives.  Funny about that.  Nevertheless, the building process was an intensely creative collaboration, and I loved it.  And when the building was finished, the decorating and gardening began, and I loved that, too. 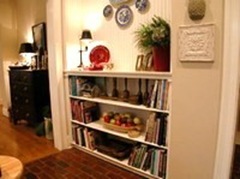 It takes a little planning to get your house ready for a home tour. You have to decorate early.  You have to decide what, if any areas, are off limits.  And, most important, you have to agree that even though this tour business is fun and flattering, it really isn't important.   As best I can remember, our plan looked something like this:  I cleaned the house from top to bottom.  The Mister pruned and added some annuals to the yard.  We got all the Christmas decorations out and set up a "staging area" in our garage.  I bought a lot of poinsettias and a yard of mulch.  We agreed that we would not get divorced, and we actually shook on it.  So, we worked like crazy for two days, and, yes, we were shoveling mulch in the dark the night before! We prayed that it would not rain, and then, the "day of" we took the children, then ages four, seven, and eleven, to lunch and to the movies and for ice cream.  When we arrived back home, just as the stragglers were leaving, and the lovely hostesses were packing up, we were told about 2000 folks had come through our house that day!

Now, a funny thing about the Mister is that he generally does not care too much about what other people think, but he suddenly became obsessed with hearing what people thought about our house.  We got up the next morning and went to church, knowing that the final day of the tour would begin at 11 am.  Our little ones were spending the afternoon with friends, so that the Mister and I could visit the other homes on the tour, but the Mister wanted to go back to our house and hide so that we could hear any comments people made!  Now, that might have been fun--assuming the comments were compliments--but I have been known to go on home tours and make remarks that are along the lines of what were they thinking?  And, I could easily picture Mr. T&amp;C popping out of his hiding place and saying, "Now, look lady, we went with the no. 3 grade pine floors because we like the knotholes!" So, no hiding.  Instead, we visited the other houses, where the Mister would go up to other tour takers and say, "We're afraid we're not going to have time to see all the houses, which ones should we try to get to?"  Thankfully, our house was usually recommended, but he did ask one patron, who said, "oh, definitely visit this one; this one (ours) not so much."  Ouch.  Still, we did visit the recommended one, which was two doors down from us.  The home of a "confirmed bachelor," this house featured amazing art and objets d'art, including a needlepoint-topped card table on which the bachelor's grandmother had played bridge with Wallis Simpson!  Crazy!

From there, we made it back to our own abode, where we lurked around long enough to hear one of the hostesses say to another that of all the houses she'd seen on the tours over the years, ours was the one that felt the most like home, like she could just move in and not change a thing.  To which her hostess/friend icily replied, "Really.  You know my home was on this tour two years ago!" and then she stomped off!

I've regretted not hiding ever since.