China. Crystal. Silver.  Like many young brides-to-be, I registered for all those staples of a well-furnished table and home.  I collected sterling napkin rings, and I was given a beautiful white damask table cloth and dinner napkins, so I felt our table was pretty well set.  And then I received a gift that upped the ante and created a slight obsession.  Eight sterling silver nut or mint dishes, monogrammed.  Heavy.  Square.  Gorgeous. I thanked the giver, wrapped them in brown flannel, and forgot about them.  Until.  Mr. T&C and I were invited to an elegant birthday supper, and our Charleston hostess had topped each place setting with a different nut dish.  Each was filled with peanut M&Ms, the honoree’s favorite candy.  I loved this idea, and so on my next antique fair/flea market adventure, I set out to find some more nut dishes of my own. I am now like a crow (and not just around my eyes!) looking for these shiny gewgaws. Eight was not enough!  The hunt is, as you know, ever so fun!  For one, marked Christofle nonetheless, I paid five dollars.  For the Tiffany shell, I paid, well, more.  Most of them are monogrammed, and a couple of them have a few dings.  Nevertheless, I now have 24 total, although the two in the lower right of the photo are actually ash trays, so they don’t really count.  I planned to give each child eight, but as I said earlier, eight isn’t enough.  Really, they’ll need at least twelve. I mostly pull them out at birthdays and holidays and sometimes when friends come for dinner.  M&Ms are my candy of choice, but I have used Red Hots, Conversation Hearts, Jordan almonds, and buttermints.  They seem to add a note of festivity every time.  We always use them for Christmas breakfast. 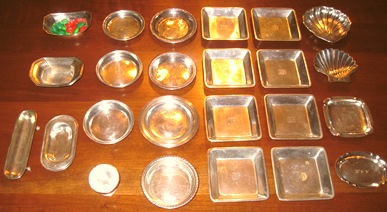 Speaking of Christmas breakfast, that’s the big meal of the day around here.  We usually don’t eat until around eleven, having some version of an egg casserole, country ham and biscuits, fresh fruit, and hot curried fruit, and cinnamon bread.  And we always have the Christmas crackers.  We put on the paper crowns and then go around the table reading the silly British riddles and jokes.  This year, Middle proclaimed the jokes the “lamest ever,” and Big replied, “well, what do you expect from people who think Mr. Bean is funny.”  Here’s a look at the table setting.  I did use a red velvet place mat this year, and although it looked fine in person, it didn’t photograph well.  The china is Haviland and was an Easter gift years ago from my mother.  The silver is Reed & Barton Hepplewhite, except for the spoon which is coin silver. 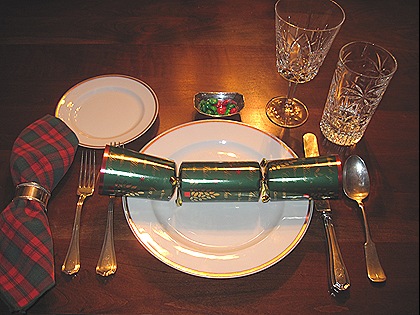 Coin silver.  Hmmm.  Could be the next obsession for this old crow.
Labels: antiques