Last fall some friends and I attended a “lunch and learn” hosted by one of the most chic florists in the city.  The lunch was fine, and all the lovely ladies were admiring the various centerpieces and tablescapes and what have you, when the shop’s owner and premier designer began her demonstration.  First, she began stuffing (her word) giant silk poinsettia blooms into the nine-foot tree to give it “dimension.”  The poor tree was already three-dimensional, so I didn’t really see the need to cram in some fake flowers.  Next came shiny Mylar sprays.  Then some lime green and copper ribbon was worked in, and finally she hung some gigantic copper-colored silk balls and perched some tropical looking silk birds artfully on the tree.  The end result was stunning, or rather, I was stunned.  Nothing about that tree looked like Christmas to me.  In my mind, it is emotion and memory that give a Christmas tree “dimension” and “depth.”  LPC at Privilege has a similar point of view.

When it comes to Christmas tree ornaments, the Mister and I have accumulated more than our fair share.  Each year, I try to sneak a few out of the Keep box and move them into the Junior League donation box, but he will have none of it.  For a few years, we were a three tree household, but, thankfully we’re now back to only one.  The downside is that not all of the ornaments make it onto the tree each year.  The old glass ornaments from Austria and the children’s handmade ones from school and church are always given pride of place.

Some of my favorite ornaments are the popsicle stick nativity, made by the Mister; the glass grandfather clock; and the fingerprint snowman on the blue ball, which was made by Little in first grade. 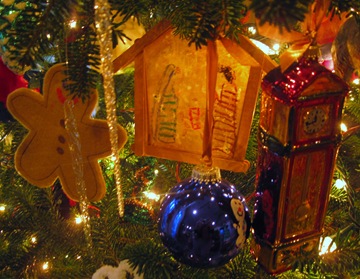 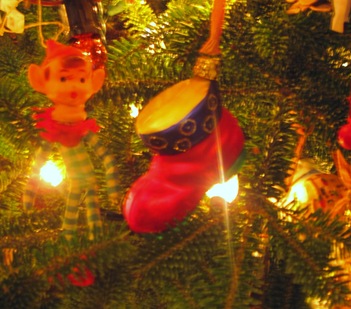 We have one of these little boots for each of the children, with their name and  birthdate on the bottom.  The little elf is a childhood ornament of the Mister’s.  Very kitsch and very cute, I think.
My undisputed favorite, though, is this paper angel of Mr. T&C.  He made it when he was in first grade, 1968.  He remembers telling his mother that he needed a picture of himself for school, so she gave him a snapshot made at the beach.  When he got to school that morning, he realized that all his classmates had head shots.  He was really embarrassed, at the time, but I think he takes some comfort in that the angel he made continues to be carefully hung on the tree each year, 42 years later. 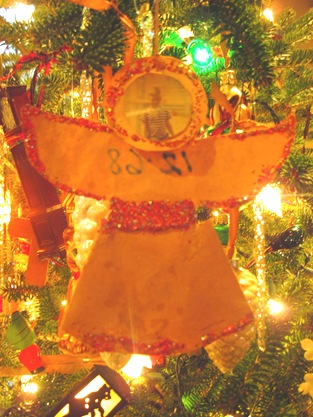