From the moment the Mister and I began to think that God might be leading us to “cut the corporate umbilical cord” and open a Go Fish store, we prayed for our children to make a healthy and peaceful transition if God led us to another city. Months later, when we were certain of our destination, we asked friends and relatives to join us as we prayed for new teachers and friends.
The morning after the moving truck pulled away from our new home, oldest son Ted and I set out for the local high school’s freshman orientation day. I drove and parked, and together we walked toward the auditorium. “Mom, I’ll be okay,” Ted assured me, as he joined the throngs of freshmen streaming inside. Suddenly, I was overcome. What had the Mister and I done? Why was I sending my child, my shy and trusting firstborn, into this school where no one even knew his name? I prayed, Dear God, this is it. Please let him meet some nice kids today. Please don’t let him disappear here. 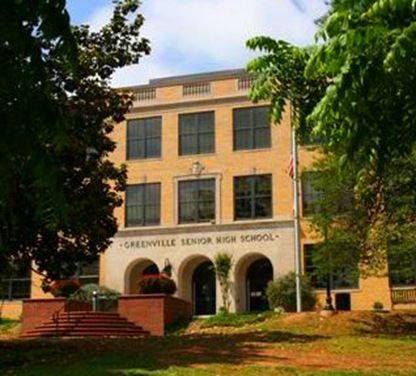 Established in 1888, the present building was built in 1938 and renovated in 2005.
A perceptive staffer asked if I was okay. I stammered something about my son going to high school. “Is he your first?” she asked. “Yes, and we just moved here yesterday,” I whispered. “Oh, honey, go on in and sit in the back. He’ll never know you’re there.” I sat through the principal’s welcome, the freshman guidance counselor’s welcome, and a pep rally. Next up was the student body president who asked for volunteers. When none were forthcoming, the young leader began choosing students himself. He called for Ted to come up and join the other ten or so. Several corny skits followed about life in high school, and in each, the hapless and unnamed freshmen were the brunt of the jokes. 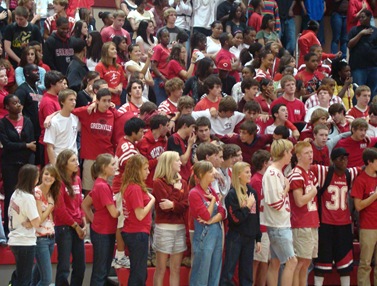 Only Ted had not yet been chosen for a skit, making me—and I’m sure him—kind of nervous! Finally, and surprisingly, the student body president asked Ted his name. “Well, it’s our tradition to pit a freshman against a senior in the annual Red Raider cinnamon-eating contest. Are you up for that, Ted?” Ted said that he was, and a lovely cheerleader handed each boy a clear plastic cup of cinnamon and a plastic spoon. The timer started and both boys began shoveling in the dry, hot spice. Puffs of cinnamon dust were billowing out of Ted’s mouth and nose before he began coughing, and the senior (who was actually eating brown sugar) was declared the champion. The entire freshman class was told to “give it up for Ted—a great sport and example of GHS spirit.” Amid much applause, Ted was given a spirit shirt for his trouble and was escorted off the stage to get some water. The students were dismissed to their new homerooms. 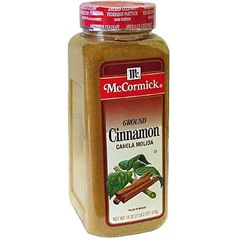 A few hours later, the Mister returned with me to pick up Ted. On the drive home, we asked all the typical questions about his classes and teachers. I confessed that I had seen him in the cinnamon contest, to which he replied, “That was crazy. All day long, kids were saying, ‘Hey, Ted!’ and asking me what it was like to eat that cinnamon. It’s like all these people I’ve never even met somehow know my name.” Thank you, God, I prayed.
“Fear not, for I have redeemed you; I have summoned you by name; you are mine.” Isaiah 43:1