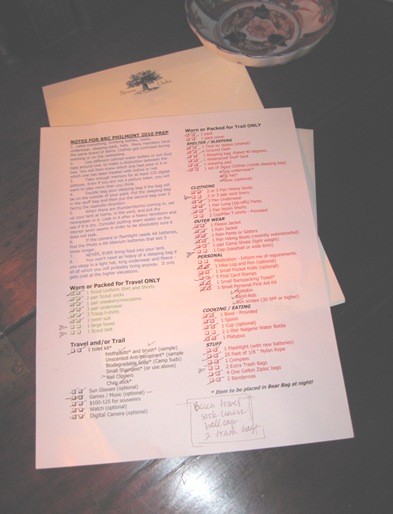 One week ago, Middle left for New Mexico, which is rather a long way from South Carolina.  Planning for this trip to the Philmont  Boy Scout Ranch began in October 2009.  Deposits were paid, and, in return, parents received a list of gear (probably about $1000 worth) that if their Scout (or his brother) didn’t already own, they could hope grandparents and generous others would give for Christmas gifts.  Things became more serious in January, when the next deposit was due, and a series of local (Appalachian Trail) weekend backpacking trips were planned to prepare the boys for the rigors of backcountry hiking out West. 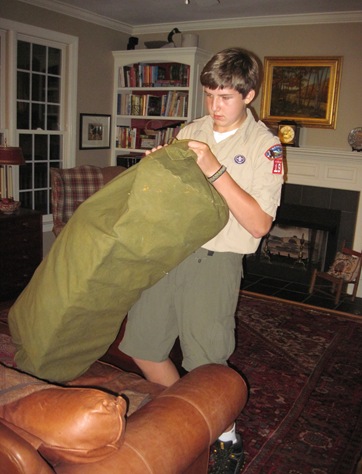 Zipping up his backpack before leaving for the airport

Running stadium steps became the Saturday morning routine.  As did cross-checking prices at various outfitters.  Boots were, literally, a big concern.  Buy them too early, and you run the risk of your Scout outgrowing them.  Buy them too late, and you run the risk of blisters and worse.  Middle’s current shoe size is the same as his age—14.  At the pre-trip physical, the pediatrician assured me that he had not yet had his growth spurt.  Hiking boots larger than a 14 are special order at best, and custom at worst.  Thankfully, he slid into a pair the week before he left, and they fit. 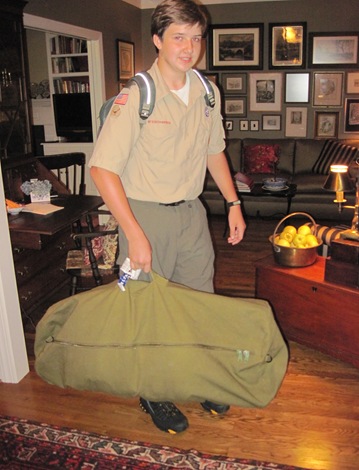 Ready to go, wearing his boots and a slight look of apprehension.

Troop backpack inspections occurred weekly, along with weigh-ins.  We had one last shopping trip, and, finally, all the boxes on the list were checked.  The gear was—dare I say—lovingly laid out on the playroom floor for several days.  In typical older brother fashion, Ted offered encouraging advice as well as disparaging comments.  He was also extremely interested in the cost of everything.

So, 10 boys and three adult leaders left in the wee, small hours to catch a flight to Albuquerque.  They spent the first day exploring Indian caves and rafting on the Rio Grande.  The next day was spent checking in at Philmont, receiving their food rations, weather updates, and last-minute instructions.  Phones, ipods, and other distractions were left behind.  On Sunday morning, they set out for 10 days of wilderness hiking and camping. 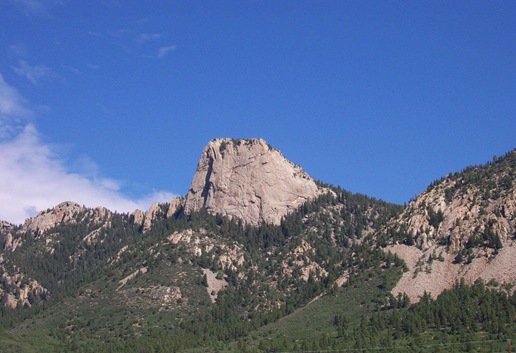 Tuesday we received a leader text that they had summitted the Tooth of Time, elevation 9003 feet.

I expect that when Middle returns next Thursday, he will be standing a bit taller as well.