It came to pass this summer that the Mister and I had slightly more than a week with only Middle at home to keep us company.  Big was on a mission trip with a bunch of senior high kids in inner city Memphis, and Little was visiting her grandparents.  Having Middle all to ourselves was a treat, although several days into the week he confessed that he hated being an only child.  When I asked why, he said simply more chores and you always know when I did or didn’t do something. Indeed.
Well, all good (and bad) things eventually come to an end, so we set out to fetch our girl and our youngest niece before our annual beach week.  On our way, we stopped for lunch at Chic-Fil-A, one of the early locations still known as the Dwarf House. 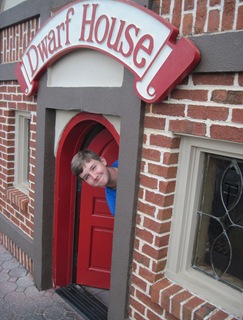 There a few of these left in the Deep South, and, in addition to the regular fast food fare, these establishments offer table service and real vegetables.  And there’s a really small door for really big boys  who like some ham with their chicken. 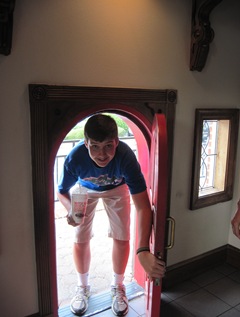 Once in Florida, we enjoyed visiting with the Mister’s parents and his sisters and their families.  And, of course, we were happy to see our sweet girl!  One tradition that we’ve adopted ever since the Mister’s folks moved from St. Petersburg to “old Florida” is rafting, or more accurately, drifting down the Ichetucknee River.  When it is 100 degrees in the shade, the river is a mighty fine place to be.  I can only imagine how it must’ve felt to the Seminoles and early settlers who did not have the benefit of air conditioning or even ice!  So we loaded up the floats and a picnic cooler and headed up the highway. Dear SIL and MIL advise dear BIL on how to load the gear.  He is ever appreciative of their wise counsel. 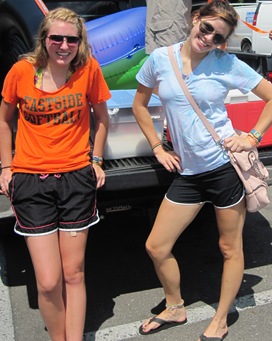 Our two oldest nieces, who are three months apart.  They were babes in arms at our wedding—now they are just babes! 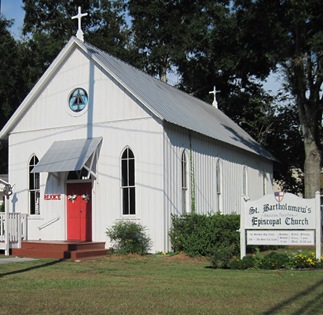 Most of the Ichetucknee outfitters, as well as those for the Suwannee, are located in the quaint old town of High Springs, where some pretty nice antiques have been known to turn up as well.  Unfortunately, I didn’t get to take a look around this time. 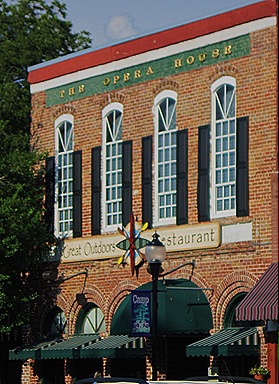 I love seeing the colorful inner tubes and rafts alongside the road. 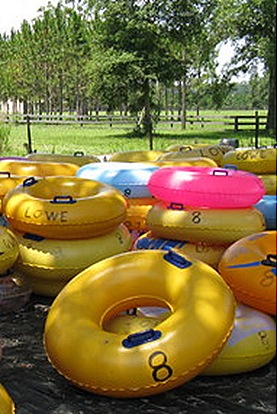 We put  in at Ichetucknee Springs State Park, where a tram takes us and our floats to a drop off point.   The tram ride itself is lovely as we wind amid live oaks and slash pine and Spanish moss, but in the distance one can hear the unmistakable whoops and shrieks of people who are hot and sweaty becoming instantly cold and clammy.  Every time I have had this particular adventure, which is now three times, I have planned how I will enter the water gracefully, how I will not get completely soaked, how I will remain composed and float serenely along trailing my fingertips in the clear, frigid water. 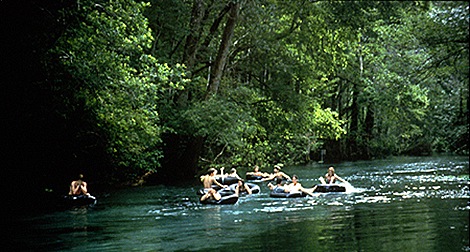 And then.  I am standing on the slightly slimy platform with children cannon balling to my right and left, and next thing I know I am burbling up to the surface, teeth chattering, and hauling my big white--ahem--self into a slippery, flipping float—a feat requiring about three times more upper body strength than I actually have!  It is not pretty, but at least it is done.
And finally, the river, quiet and swift and cold.
Really cold.
Labels: chik-fil-a Down South Florida High Springs Ichetucknee River old Florida travel tubing