As most readers must surely know, actress Barbara Billingsley, died this past week.  Billingsley, best known for her role as loving wife and mother on the television show Leave It to Beaver,  became an American icon, representing to many the ideal mid-century woman.  She did make it all look rather effortless; I think it’s important to remember that Billingsley was an actress portraying a character.  Nevertheless, by all accounts, Barbara Billingsley was as lovely and gracious as June Cleaver, who frequently did her housework while wearing a simple string of pearls.  For that reason, the also lovely and gracious Suburban Princess has declared October 22 as June Cleaver Day, asking everyone to wear their pearls to honor Barbara Billingsley. 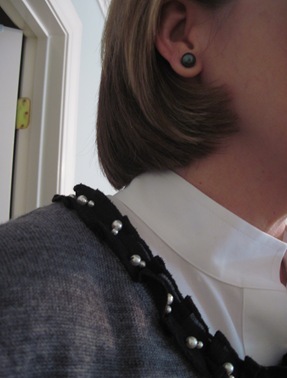 Here you can see I’m wearing pearls on my sweater, stitched on black grosgrain ribbon, as well as my black pearl earrings. 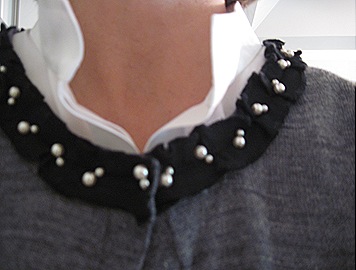 And, here’s the pearl and ribbon detail of the sweater once more.  I must say, it is quite sobering to look at pictures of one’s neck when you reach a certain age!  Although I seldom write about fashion, I will say that I paired the sweater with a black pencil skirt and flat black boots, to sort of balance things a bit.
Lastly, in tribute to June, Barbara, and my own mother, who clipped this recipe for me years ago, here, allegedly, is Barbara Billingsley’s chocolate chip cookie recipe. 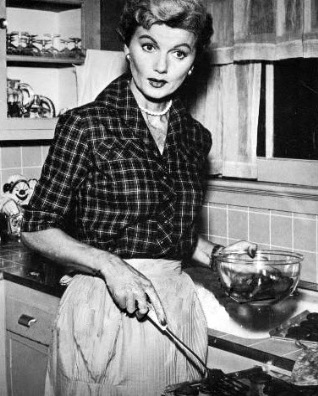 And, if you’re too young (as I am!) to have watched Leave It to Beaver when it originally aired, I highly recommend picking up a dvd for an evening’s entertainment.  You’ll find plenty of mid-century fashion as well as some seriously good parenting tips and wholesome humor.
Labels: cooking