Will You Walk into My Parlor?

So begins the charming and slightly spooky poem “The Spider and the Fly,” published by British author Mary Howitt (1799-1888) in 1829. After offering such an innocent-sounding invitation, the crafty spider goes on to tell the fly that hers is the “prettiest little parlor that you ever did spy.”  Although I’m certain that my parlor is not the prettiest, I do, like Miss Spider, “have many curious things to show when you are there." 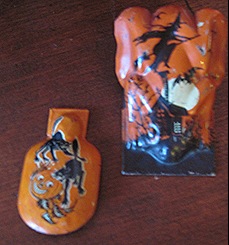 Collecting Halloween ephemera is not something I set out to do.  Because of my Christian faith, I’m far more inspired and interested in celebrating Thanksgiving, Christmas, and Easter.  Beyond carving a Jack O’Lantern, decorating for Halloween is kind of new to me.  It all started years ago when I was sorting through some family Christmas ornaments, and I came across these tin noisemakers that had been my mother’s when she was a girl in the 1940s.  Called clickers or crickets, these party favors actually make a loud, hollow pop!  I instantly loved them because of the great graphics and because they had been my mother’s.

After a little research, I found that they most likely were manufactured by the Kirchhof Company of New Jersey.  The firm also produced Braille printers and ticker-tape machines. Kirchhof entered the holiday market initially by making Christmas tree candle holders, then noisemakers.  Kirchhof is thought to have supplied American soldiers with the crickets (clickers) used at the World War II Invasion of Normandy. Clickers were used by Allied paratroopers as a way of identifying friend from foe. A soldier would click once, and if two clicks were received in return from an unidentifiable soldier then his identification was confirmed.  But, I digress.

Of course, my clickers had to be displayed, but since they were small, I needed to provide a setting for them.  Naturally, papier mache Jack O’Lanterns provided the perfect background.  In an earlier post about fall decorating, Falling Into Place, I mentioned a few of my self-imposed decorating rules.  Let me just say, I realize I’m on mighty thin ice with Rule Number Three! 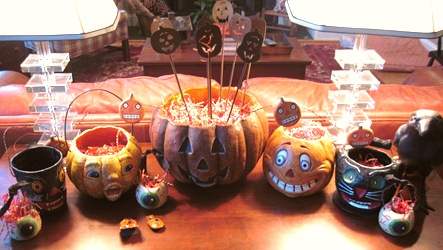 Nevertheless, here’s the drop-leaf table in the family room.   It’s really the focal point of all our Halloween decorating. 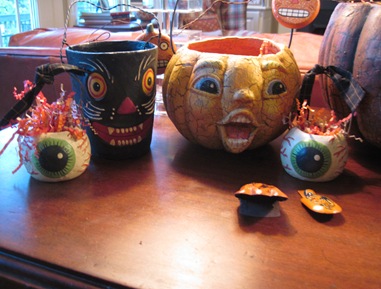 Other than the clickers, none of this is old or even vintage, but I think it has the right look.  The eyeball pails add the perfect twist, in my opinion. 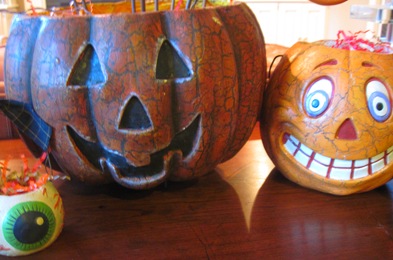 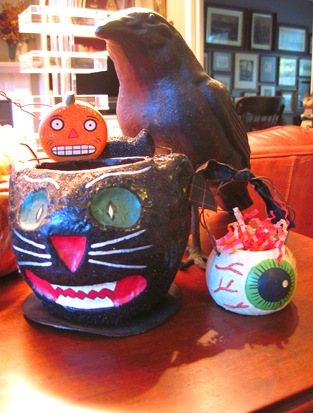 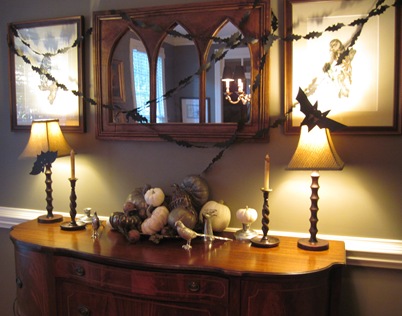 I tried something new in the dining room this year, adding a few homemade bats the children made years ago.  The paper bat garland is a Martha Stewart whimsy.  One end is trailing down to the pumpkins in this photo, but, don’t fear, it’s been re-affixed. 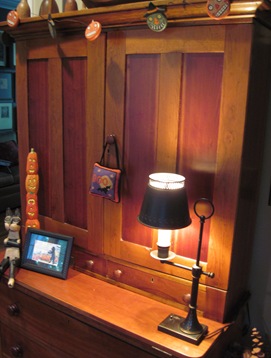 Back in the family room, a totem pole of Jacks and a wooden cat cozy up to an old framed postcard that reads 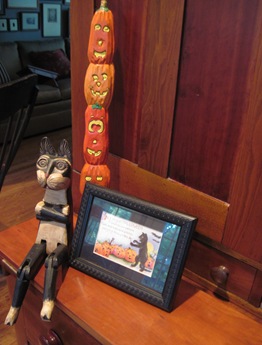 Sing a song of Halloween
Pumpkins everywhere,
Cats and bats and witches
are flying through the air!
And, there you have it—a quick tour through my parlor.  I hope you enjoyed it!
Labels: decorating holidays