Tomorrow is Veteran’s Day in the United States, a day to recognize and remember the sacrifices that thousands of men and women have made to defend and protect our country.

Both the Mister's and my fathers served in the United States military.  Mr. T&C's dad left Michigan as an 18-year-old boy to join the Army to serve in World War 2.  He spent most of his tour in Italy, and to this day, he doesn't care for pizza or lasagna.  He never talked at home about his experiences during the War, but surely they were life-changing.
He and the Mister's mother used to babysit often when the children were little. 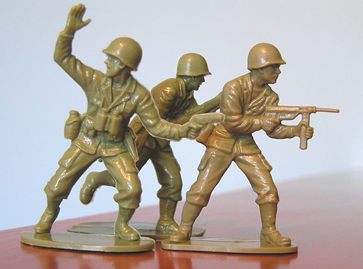 One afternoon the boys were playing with their green army men, and something about their set-up seemed different to me. I asked a question or two, and Middle, who must have been about four at the time, could tell me the rank and mission of each soldier, based on his stance and weaponry.  When I asked him how he knew so much, Big piped up and said, "Papaw's teaching us."  Later, when Big had to interview a veteran for a school project, he chose his grandfather.  All of us were shocked to learn that Papaw had barely escaped with his life at least twice.  In one case, he was awaiting his relief from guard duty when he heard a noise; he stepped outside to see if the noise was the approaching soldier, and seconds later, the guardhouse exploded!  On another occasion, he was guarding a prisoner who had managed to conceal a pistol--again another narrow escape! 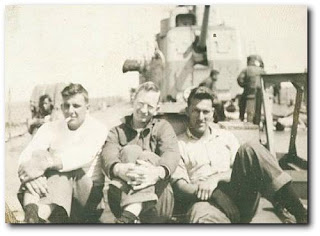 My dad  (that's him on the left) served in the Navy during peacetime--after World War 2 and Korea, but before Vietnam.  He sailed the Atlantic, the Caribbean, and the Mediterranean on a destroyer, the USS Bearss, shown below docked in Norfolk. 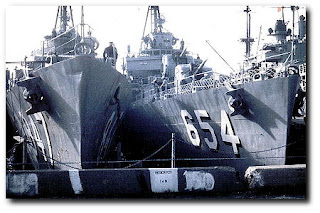 Several years ago at a fund-raising dinner, Dad had the opportunity to meet former Senator Bob Dole, a man and veteran Dad has long admired.  Dad said something about not serving or sacrificing as greatly as others, and Senator Dole wisely said, "You were ready to, and that's what matters."
And so, tomorrow on Veteran’s Day and everyday, thank you—to all who went and to all who were ready to go.
Anchors Aweigh
Blue of the Seven Seas; Gold of God's great sun
Let these our colors be Till all time be done-n-n-ne,
By Severn shore we learn Navy's stern call:
Faith, courage, service true,  With honor over, honor over all.
Labels: family tradition