A Moment to Reflect

If each year is a rollercoaster with ear-popping climbs and careening twists and turns, then surely Thanksgiving Day is the peak, the crest before the final thrilling drop, the rush to the end of the year where as the cart lurches to a halt one must smooth her hair and gather her bag and depart with some sense of decorum.   And so.  As our cart teeters at the top, tipping slightly forward, into the holiday season, I for one, would like to breathe.  For at this moment, I don’t know if I will be clutching the safety bar, white-knuckled and holding on for dear life or if I will be holding my arms up and screaming with delight.  Of course, I’m hoping for the latter.
So to breathe.  To be grateful.  To count my blessings, which are, truthfully, too many to count.  And to remember.
It was faith, courage, and bravery that brought us to the first Thanksgiving. 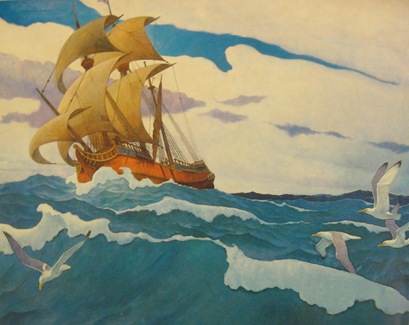 The first Thanksgiving came after leaving home, after suffering, after sickness, after grief. 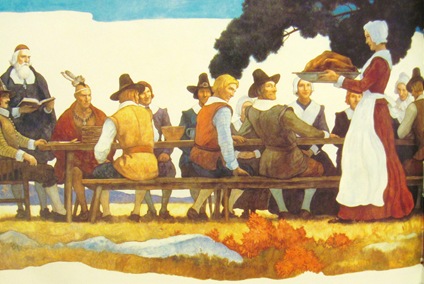 The celebration came after hard work, after toil, after struggle, after compromise. 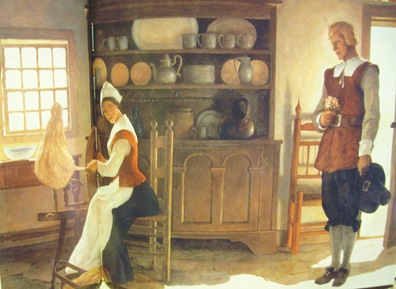 And still after such hardship and loss, people gave thanks and were grateful to God not so much because the worst was over, but because—in their faith, they knew the best was still to come. 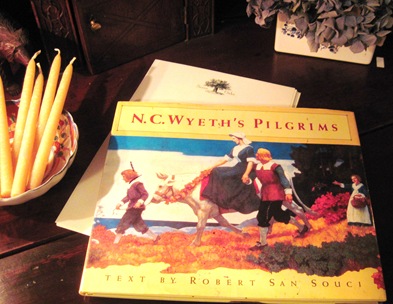 The above images were taken from N. C. Wyeth’s Pilgrims.  Wyeth, father of Andrew Wyeth and grandfather of Jamie Wyeth, was renowned for his illustrations of such children’s classics as Treasure Island and The Last of the Mohicans.  These images were commissioned for a series of murals by the Metropolitan Life Insurance Company in 1940.
Another book that tells the story of the Pilgrims and Thanksgiving is Barbara Rainey’s A Thanksgiving to Remember.  This publication includes the story of the Pilgrims in a read-aloud version for younger children as well as a more detailed version for older children and adults. 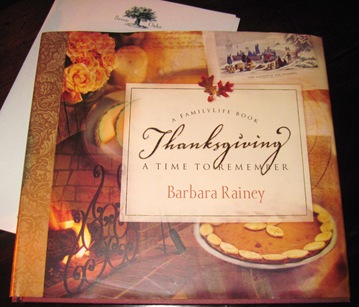 For a delightful Thanksgiving tale set in the 1820s, Louisa May Alcott’s An Old-fashioned Thanksgiving is a marvelous story that gives a glimpse into a loving New England family. 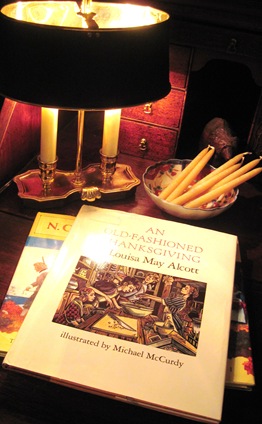 Lastly, for older children and adults, Truman Capote’s The Thanksgiving Visitor is a poignant story not to be missed. 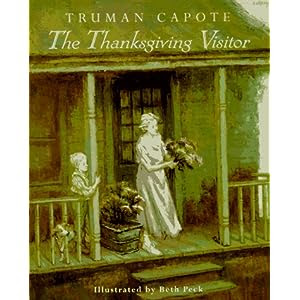 I hope you find a moment to breathe a prayer, to read and to ponder, to sit at the top of the roller coaster and appreciate the view.
Labels: holidays N. C. Wyeth Thanksgiving Thanksgiving books