Here at the T&C house, we are all fond of tradition, but we have learned to adapt and adjust through the years.  For instance, Big, Middle, and Little know not to look for glittery boot prints by the hearth on Christmas morning, and, although it pains me to admit this, we’ll be using store-bought dough for Santa’s cookies this year.  Nevertheless, there are a couple of traditions that surprisingly continue.
The first is The Christmas Eve Eve Camp-out, which means that all three children set up camp around the Christmas tree and fall asleep on the floor looking at the lights and ornaments.  When they were little and snuggled in their footed blanket sleepers, the Mister or I would switch off the tree around 11, and they would sleep peacefully until they heard the coffee maker the next morning.  They were soooo sweet, sleeping so close together, so excited for Christmas.  This year, two of them are over six feet tall and snore, which, frankly, isn’t all that cute.  Still they’re mine, and I love that they want to keep their camp-out tradition.  But, it could get weird when they’re married. 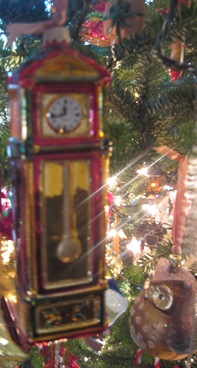 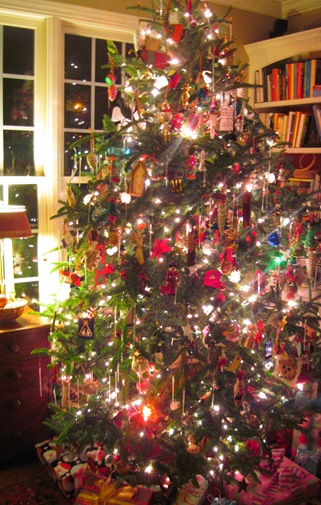 The second simple tradition that no one wants to change is our Christmas Eve menu.  When our children were little, I somehow found myself in the role of Christmas pageant director at our small Episcopal church. 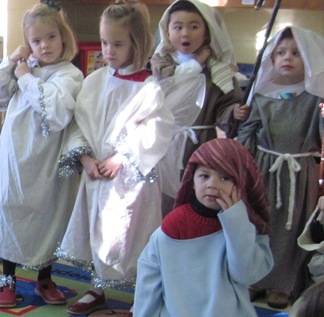 In addition to having our three scrubbed and polished in Christmas Eve clothes, we had to wrangle them into whatever costumes were theirs for the service.  When we arrived at church, I had anywhere from 15 to 20 more costumes to pin and tuck on wriggling children, so that the Nativity tableau could take place in the glow of candlelight.  I was also responsible for the Birthday Party for Jesus that followed in the parish hall.  Meanwhile, the Mister and I usually had anywhere from four to six overnight guests that we were hosting and that would be expecting dinner—after cake and punch, that is.  Clearly, these were not the years for me to attempt standing rib roast and Yorkshire pudding. 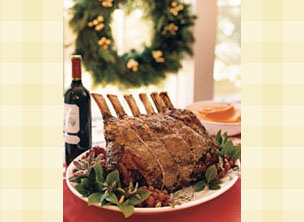 Thankfully, our rector’s wife, the mother of two rambunctious boys, shared her menu with me: Shepherd’s Pie and Angel Food Cake.  Shepherds and Angels, what could be more perfect for Christmas Eve?  And so it continues.  For the past couple of years, I’ve asked if anyone wants to change it up a bit, but the answer is always No, we love shepherd’s pie. 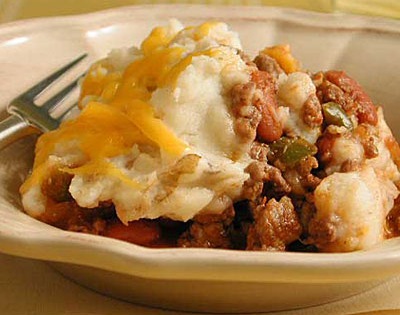 And, so shepherd’s pie it will be—a humble meal to help us remember that Jesus, the Savior, was born in a lowly stable, where real animals ate and slept. A humble meal to remind us of the rough and simple men to whom God revealed His glory on that Christmas night.


And there were shepherds living out in the fields nearby, keeping watch over their flocks at night. An angel of the Lord appeared to them, and the glory of the Lord shone around them, and they were terrified. But the angel said to them, "Do not be afraid. I bring you good news of great joy that will be for all the people. Today in the town of David a Savior has been born to you; he is Christ the Lord. This will be a sign to you: You will find a baby wrapped in cloths and lying in a manger."  Luke 2:8-12

May it keep us ever mindful of the Good Shepherd, who humbled Himself for us.