I went to the same party three times this past week!
First, I went on a Sunday evening while Little went to her small group meeting down the street.  Little and I went together on Tuesday night while the Mister and Middle were at Boy Scouts.  Then, on Thursday, I attended again with a friend right after lunch.  So, what kind of party starts at one o’clock on a Sunday afternoon and continues from nine in the morning until nine in the evening  Monday through Friday, and then, finally, wraps up on Saturday?  A wrapping party, of course!  And it’s one of my favorite parties of the year. 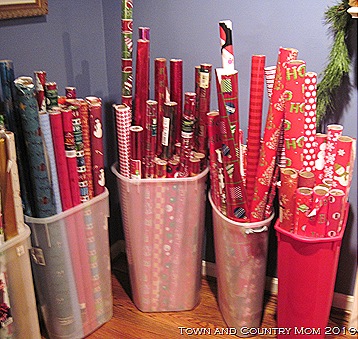 Our hostess, C, is in my Tuesday morning Bible study group, and this was the second year I was blessed enough to be invited.  C has kind of a thing for wrapping paper.  And ribbon.  She has been collecting it for years.  And she’s extremely organized, storing the paper in her attic by color.  Seriously. 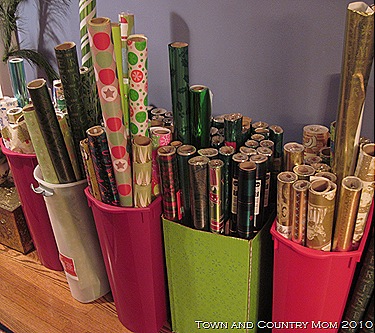 C also enjoys her girlfriends—from the neighborhood, from church, from her PTA days.  I doubt she has ever met a stranger!  About four years ago, she found herself wrapping presents in a back bedroom while her sons and husband were enjoying the ambience of their beautifully decorated tree in the family room.  She figured if she was wrapping in a secluded fashion then her friends might be, too, and that’s how the idea for the wrapping party was born.  I’m sure it didn’t hurt that she had so much paper! 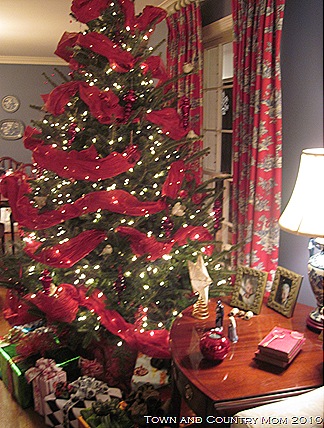 So, early in December, C sent invitations to about 150 of her closest friends.  And she invited them to bring friends as well.  Then, she bought some wine, and she made some cider and some iced tea.  And some white chicken chili.  And what is known around here as PTA Pasta Salad.   And some spinach dip.  Oh, and some cookies.  C tends to be fairly energetic.  I think she’s probably been described as a fireball once or twice. 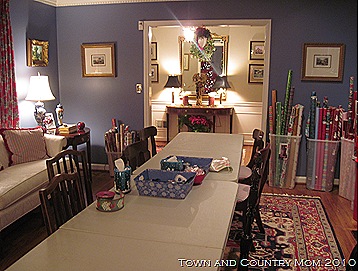 She stocked up on scissors and tape—the shiny kind and the matte kind.  (And she will not let you use the matte kind on foil paper or the shiny kind on kraft paper.  She’s particular--in a good way.)  She rearranged her living room and dining room furniture to accommodate her friends, and she set up tables for wrapping. 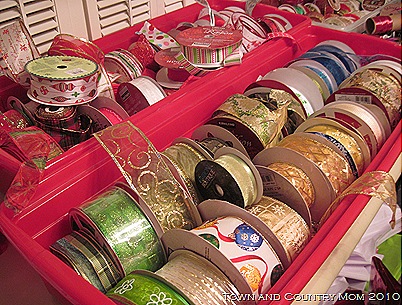 Her ribbon is organized by color, also; although here it is a bit of a jumble because many hands had been plowing through it minutes before I took these photos.  C likes helping everyone find the ribbon that suits the paper best. 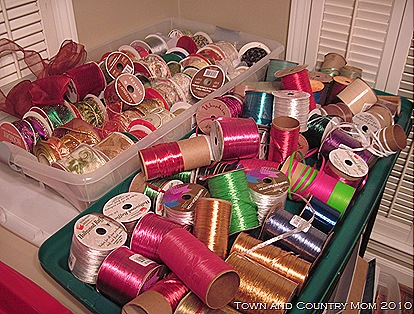 All the girls, as we optimistically call ourselves, bring our gifts to wrap and our own boxes.   Someone asked C if she’d thought of having a “men’s night” for wrapping, to which she replied that she just wasn’t interested in having a bunch of men in her house on Christmas Eve! 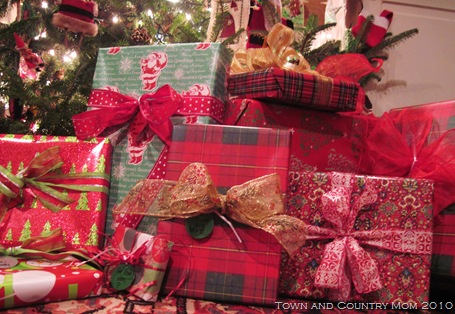 I used to try to coordinate all my papers each year, but I’ve loosened up a bit (still no stick-on bows—not now, not ever!) and this year I just chose papers I liked.  And I like red.  I love the plaids and the retro Santa paper, too. 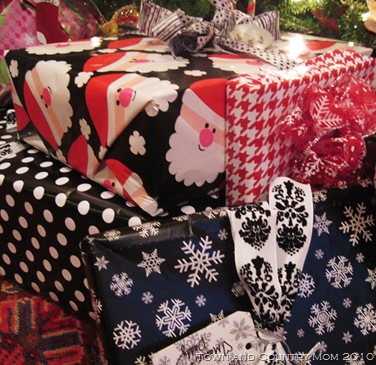 I don’t usually go for modern, but Little really liked these fun prints. 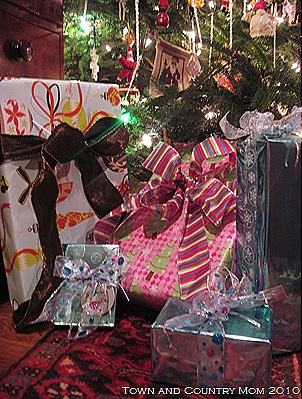 And for Miss Little, I sneakily chose a few girly papers and ribbons for her gifts.

It is such a great feeling to know that ninety percent of the wrapping is finished, and wrapping presents with C and friends was such fun! 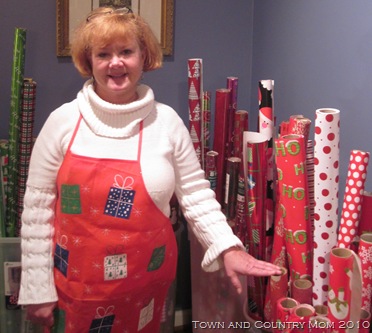 This year’s party was a bit bittersweet because C and her husband are moving to Dallas in a few months.  She will be terribly missed, and I think her new guest room is already booked for the first year!  Thankfully, she and her husband have family in our area, including two sons, so I am sure she will be back to visit often.  In the meantime, I’ve heard that several of her closest friends are considering making next year’s party the Wrapping Road Trip!
Now, wouldn’t that be something?


Thanks, C, for including me and inspiring me this season!  Merry Christmas!
Labels: gift wrap holidays hospitality wrapping paper wrapping party