Ode to a Grecian (well, probably not) Urn

We really don’t watch much tv; we don’t have cable or satellite or dish or whatever.  We do have homework and piano practice and basketball games, and, truthfully, and thankfully, we’re kind of choosy about television.  Still, I do love AR, and I hope to attend a taping some day—perhaps in Atlanta this summer.  In the meantime, I would love one of their porcelain experts to make a house call. I need some information.

You see, when my parents came to visit at Thanksgiving, they brought us two identical porcelain urns. 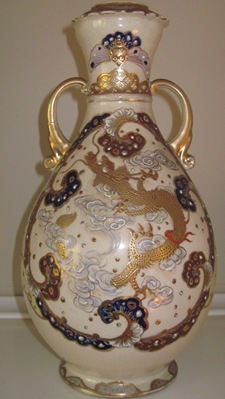 I remembered the vases well, as they used to be on the mantel of my grandmother’s fieldstone fireplace in Tennessee.  They had been a gift to her from the estate of her former sister-in-law, or my great aunt Zola, who lived on East 59th Street in New York, just around the corner from Bloomingdale’s. 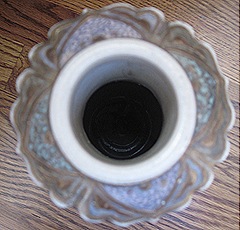 Zola was married to Ralph, a lawyer in Manhattan in the first half of the 20th century.  When Zola died in 1957, the urns went to my grandmother.   When my grandmother died in 1997, she left them to her daughter, my aunt Grace.   My aunt and uncle have recently moved into an assisted living facility, and my aunt wanted me to have the urns.  No one in my family knows anything about them; my dad seems to remember hearing that a client had given them to my great uncle, but that’s it. 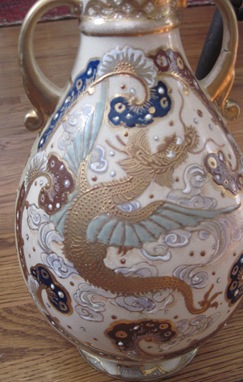 Both urns are painted primarily in gold, navy, and a pale turquoise on a creamy background.  A golden dragon with the slightest bit of brilliant red resides on one side of each vase, while a dragon rendered in gold and turquoise is on the opposite side.  They are about 15 inches tall and about six inches in diameter at their widest point.   One of the handles has been broken and repaired. 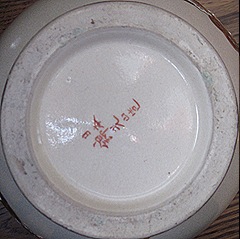 The markings on the bottom of each are Chinese.  I like these vases a lot, and will keep them for sentimental reasons, even if it turns out that they were bought at Woolworth’s in 1956. (Truthfully, they might be made into lamps, if that’s the case.)  I am, however, curious to know if they are older or if they are reproductions.  I know a tiny bit about porcelain, namely Imari, Rose Medallion, and some Staffordshire.  These beauties have me stumped, though, and I really don’t even know where to start.

So, Dear Readers, any suggestions or information will be most appreciated.  Somebody must know something.