Up at 5:15, I crept about my in-laws’ guest bedroom in the pitch dark to get ready for my day of antiquing.  At exactly 6:05 my sisters-in-law pulled up outside the cabin, and we were off on our annual adventure.  It’s a two-hour drive to Renninger’s, but the time went quickly as we solved the world’s problems and alternately discussed what we hoped to find at the Extravaganza. 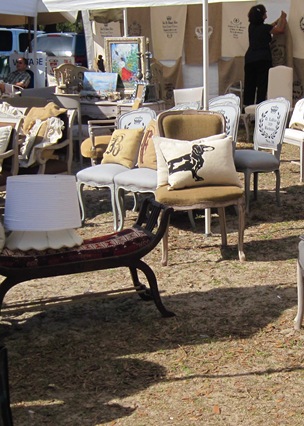 We scored a parking space at the bottom of the hill, which may seem insignificant at eight, but it is of utmost importance at five in the afternoon.  We breezed through the gate, thanks to a dealer friend who sends us three-day passes each year, and we were off to the indoor dealers.  As a courtesy to Renninger’s permanent dealers, the indoor stalls open at eight; the outdoor booths may not sell until ten.  Most dealers abide by this code, nevertheless, I am always eager to get outside and get going.

First find of the day were these sweet thumb back chairs with solid plank seats.  The one on the right still has some of the original red paint. 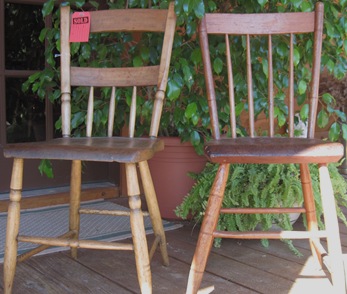 They’re just simple country Windsor chairs with good signs of wear and nice turnings, perfect to hold towels in a bathroom or to serve as an extra chair in a kitchen or informal bedroom.  Of course, I ask, What’s your best price?  How about ten a piece?  My reply is that I’ll be by to pick them up before the show closes.

Next up, a brass lamp.  Heavy.  This was marked $80 with a shade I didn’t particularly care for, which turned out to be my bargaining chip.  When asked her best price, the dealer came down to $60 right away, and I countered with $55 if she kept the shade, which I thought looked a little too new and “Targetish” for this lamp.  Deal.  Now the question for you, Dear Readers, is shall I polish it to a gleam or leave its patina?

I still have a lot to learn about Imari, but I’m studying and trying to get the “feel” for what’s really old.    I love the navy, the rusty red and the bright spring green on these pieces. 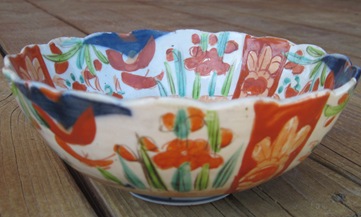 I tend to like the less formal pieces, those without any gold trim. 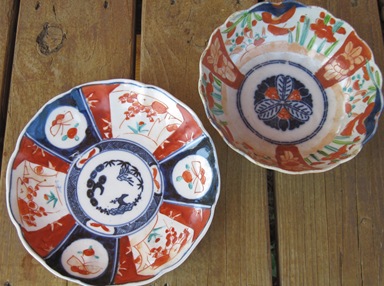 I’ve seen similar Imari in design, weight, and wear priced much higher, so I jumped at this scalloped bowl and plate.  Marked at $48 and $45, respectively, I got both pieces for $70. 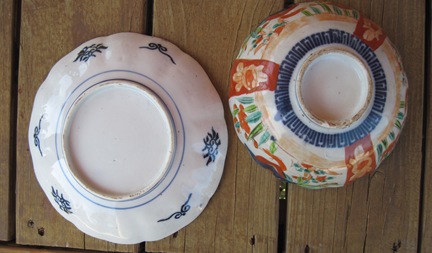 This dealer had several more plates, and I am wishing I had bitten the bullet and bought them all, as I’ve seen them recently in the $80 to $150 range here in town.  I love how they look in our living room secretary. 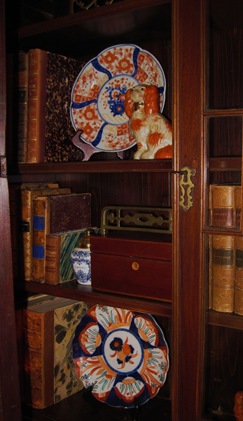 Another favorite that I’ve gotten rather hooked on collecting, much to the amusement of my sisters-in-law and the Mister, are miniature brass fireplace fenders.   I know, crazy.  But I love them!  The debate rages as to whether they were made for dollhouses or as salesmen’s samples (which is what I think), but they add just a bit of brightness and interest to a bookshelf or tabletop.  So far, I’ve yet to see two alike.  Of course, I have only seen three for sale in the past two years, and I’ve bought them all.  This one is rather dinged up, but they are so hard to find that I really didn’t hesitate. 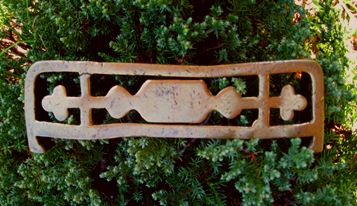 This show’s addition to my collection cost a mere, well, never mind; I think the Mister does read this.  Let’s just say that comparatively speaking it was a great buy and leave it at that.

My last two finds include a brass-knobbed walking stick, which was just not that interesting when photographed, but it does look good in my umbrella stand, and this charming gent. 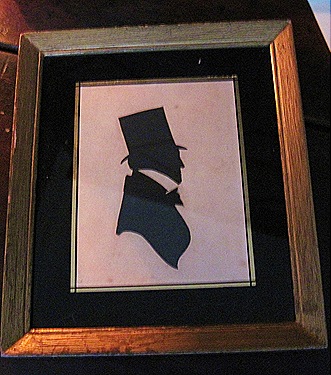 I’ve had a thing for silhouettes for years, but I’ve only recently been collecting them.  This piece appears to have  a wedding announcement on the back, stating Lovell-Pugh.  On the 23d inst., at St. George’s, Hanover-square, by the Venerable the Archdeacon Clive, Peter Audley Lovell, Esq. of Cole Park, Wilts, to Mary Jane, youngest daughter of David Pugh, Esq., M.P. of Montgomeryshire.  Handwritten below is what looks like February 1857.  Again I have a lot to learn (starting with, does the gentleman’s costume fit the time and occasion?), but that’s part of the fun.  I paid $40 for this obviously hand-cut silhouette.

Did I mention that the Mister came to meet us for the second half of the day?  Well, he did, and we had a lot of fun, but the Mister needs care and feeding, so we stopped for a quick bite at one of the market’s many food vendors.

While we were scarfing down our sandwiches and chatting with a nice lady from Maine, I glanced up and recognized Eddie Ross and Jaithan Kochar walking up the hill!  In a most out-of-character moment, I excused myself and hopped up to chase after them!  I caught up with them at the next chow wagon, where I managed to blurt out that I didn’t want to bother them, but I just had to tell them how much I enjoyed their work in various magazines and their blog.  They could not have been more gracious.  Eddie even found a gentleman to take a photo of the three of us!  They were at Renninger’s on assignment for Southern Living magazine.  They will be doing a feature called In With the Old, which makes its debut in the May issue—I can’t wait!  Read all about it here. 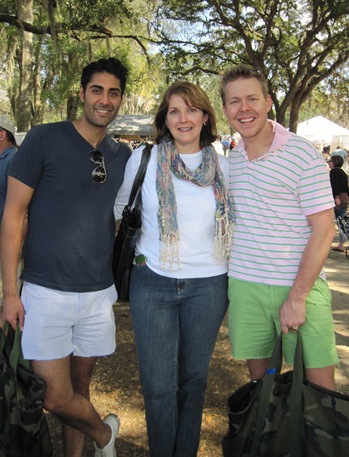 So here we are under the oaks.  I loved that Eddie and Jaithan were carrying LL Bean camouflage bags, but I guess I’ll have to wait a few months to see the  finds they were toting!

Thanks so much, Eddie and Jaithan, for taking a few minutes to talk with me.  I hope we run into each other again sometime!  In the meantime, I look forward to keeping up with you at Eddie Ross {dot} com.