Several days ago, I was delighted to find a new post about seashells on one of my favorite blogs, Reggie Darling.  Reggie routinely sets the bar high for good manners, tasteful decor and stylish living, but many blogs do that.  Reggie is attentive to detail, and his writing his witty and grammatically correct, which earns huge points with me.  What really sets Reggie apart, I believe, is the research and entertaining history that he incorporates into many of his posts. And that was what I found so charming about his post, Shell Mania. Lettered olive shells on Rose Medallion plate
I had planned to do a short post on seashells before I saw Reggie’s (honest!), but his post did inspire me to “dig a little deeper,” shall we say!  I have decorated with found shells for years.  The Lettered Olive is the state shell of South Carolina, and so that is one of my favorite varieties to find and display. Most of mine are thumb-sized, but they can get much larger. 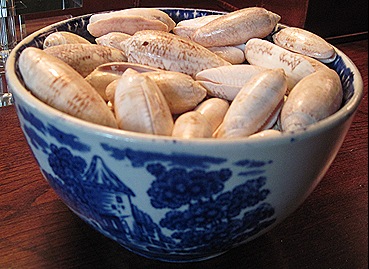 Lettered olive shells in an old crockery bowl
After the Easter decorations are put away, these bowls and plates and various containers are usually filled with pinecones or lemons or left empty “to breathe.” Usually around Flag Day, I begin to get interested in adding some summer to the house. That’s when the shells come out.  The scallop shells below are from Anna Maria Island on Florida’s Gulf Coast. These shells are similar to the ones we find in Peru. The Peruvian government and U.S. Customs both frown on transporting shells, but I have managed to slip in a precious few. 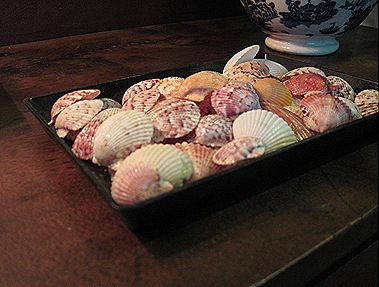 Scallop shells in a black lacquered tray
The best time to find shells is during or just after low tide. Storms can yield spectacular results, so plan to take a walk once the weather clears. A net bag provides the ideal container for gathering shells, but a sand pail works great and a plastic grocery bag will do in pinch. It goes without saying that any shell that is still occupied must be returned to the sea.
After collecting shells, rinse them well and leave them in the sun to dry.  If you’re going to be at the beach for several days, then I’d suggest bringing along a Tupperware-style container or a disposable foil baking dish for soaking shells. After the initial shell rinsing, fill your container with water and a few drops of bleach. A few hours’ soak ensures that you will not be traveling home with  all the scents of the sea! 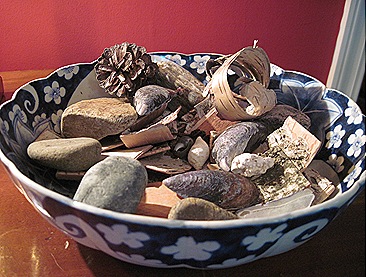 Quahog shells, rocks and birch bark from a Maine vacation
One year while vacationing at Amelia Island, I spent hours walking the beach at low tide searching for a whole scallop shell. I knew that when I found this shell that it would be giant (at least as large as my hand) because the broken pieces scattered on the beach had deep ridges spaced widely. I looked and looked to find that whole shell, and finally felt as if God was telling me to stop looking for the perfect and to instead see the beauty in the brokenness. 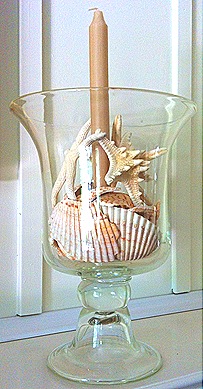 Scallop fragments and (purchased) starfish
I began to gather the fragments, and every summer when I pull the shells out of storage, I’m reminded and inspired to think of ways that lesson applies to more than just shells.
Do you collect sea shells? Where have you found the best shelling? And how do you display your collection?
Labels: decorating shells summer