Starting over in the fall

"Life starts all over again when it gets crisp in the fall," or at least that's what Jordan says in The Great Gatsby. And, likewise, perhaps, so will this blog.

I left it a little over a year ago, thinking I'd pick it back up in a few days, then weeks, months, and then it just seemed like there was no time. The thing is, I thought about it almost every day. I can't tell you how many pictures I've taken and notes I've made, thinking that would make a good post.

Earlier today I was talking to my daughter, who, if you've read here in the past, is known by "Little" on the blog. She asked why I didn't blog anymore, and I replied, "Oh, L, you know I write all the time now for work." To which she sagely stated, "Well, you need to be writing not just for work but for yourself." So, three hours later, here I am. Less time to write, but a better laptop, so I'll see what happens.

I'm tempted to try to catch up on the past year, document all the family milestones, but that is most certainly the way to frustration, not to mention boring everyone to bits.

Instead, I'll jump in with the story of Middle, who turns 18 next week.


Last spring, Middle decided that he wanted to play football his senior year of high school. The Mister and I considered. We lectured about grades and responsibilities. We worried silently about concussions, broken bones, and worse. We bemoaned privately the loss of our Friday night freedom. We reminded Middle that he had never played football before--no PeeWee, no Pop Warner, no JV, so probably he would spend a good bit of time on the sidelines.


And he did. Every morning for the next six weeks, Middle woke himself up at 5:30 am and drove to the high school weight room for training and conditioning. He stayed after school every day with the team for spring practice. He ran in the heat of summer until two-a-days started, and then he woke up at 6 am to go to early practice. He memorized plays; he watched old games. He made notes. And the Mister and I said to each other, our boy is really working hard. I hope he won't be disappointed.


The first game was scheduled for the last Friday in August. Hot. With a coolness that is unique to high school seniors, Middle wore his jersey, #79, to school that day, but admitted he didn't know if he'd get to play. At 6'4" and 190 pounds, he's an offensive tackle. The coach put him in with a few minutes left in the third quarter, and the Red Raiders scored their first three goals of the season.


The next game was almost an hour away against a football powerhouse, and Middle saw only one second of playing time. Our team was 1 - 1. We were back home the next Friday night, and Middle started and played the entire game as he has ever since (unless we lead by more than 30 points!).


The Mister and I have missed two away games--one for a dinner party with old friends and one for a gala at the art museum. (At both events, we surreptitiously read texts of scores and game updates.)


This Friday, the Red Raiders face their first play-off opponent, and we couldn't be prouder. Oh, the rah, rah, rah, playing and winning is great, but what we're really proud of is Middle's determination and self-discipline.

And, every Friday night after Middle returns home, he and the Mister head for McDonald's. That may not seem like much to be proud of, but senior football players have a lot of options for celebrating after a game, and not all of them are good. 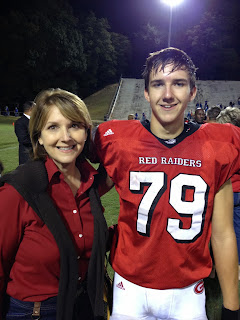 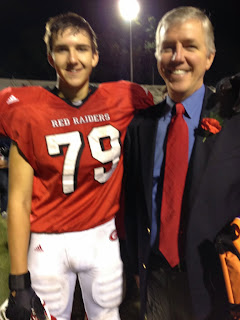 So when our Red Raider just wants to get something to eat with his dad, I'm proud of that, too. 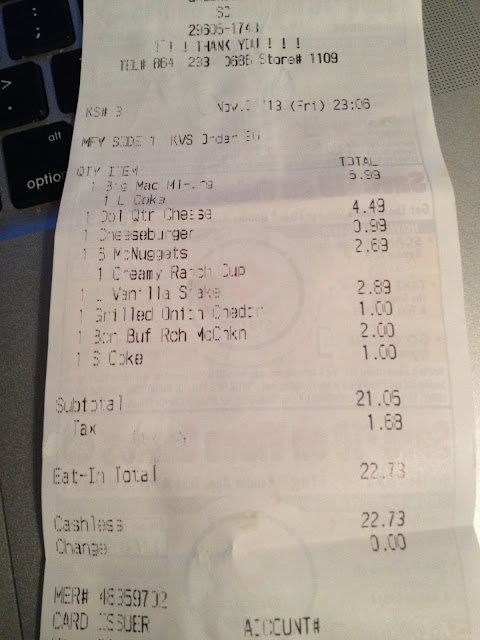 Um, yeah, the Mister had the small Coke, and that's all, if you were wondering.
Labels: family football high school kids growing up tradition