Collecting 101: Signs of the Times

When the Mister and I first began keeping company via long distance, we wrote a lot of letters, getting re-acquainted. When he invited me to visit him in Florida, he asked what I'd like to see and do while I was there. Walt Disney World? Well, sure, okay, but I'd recently read an article in Southern Living magazine that described the central Florida town of Mount Dora as a charming spot for antiquing, so, of course, that's where I wanted to go. The soon-to-be Mister was slightly intrigued, but most important, he was agreeable. We've been antiquing ever since. Sometimes, we're kind of competitive about it, each of us trying to score "a find" to surprise the other. More often than not, the Mister does the first walk-through with me, and then finds what he calls "the bored husband's chair" or bench, where he reads, catches up on email, or people watches.

You see, I look for furniture, rugs, Imari porcelain, sterling silver, paintings, silhouettes, lamps, textiles, toleware, wooden boxes, miniature brass fenders, Rose Medallion porcelain, tartanware, Blue Willow and Canton porcelain, quilts, needlepoint, vintage holiday decorations, brass keys, baskets, pottery, decoys, and the Mister looks for bottle caps (don't ask me, I really have no idea, but they're cheap) and old signs. I like old signs, too, but there's a worrisome possibility that incorporating too many old signs into our decor will result in a look that's more Cracker Barrel than I'd like.

But then, there's love. And so when this large two-sided Apples sign appeared on my radar, I knew it would make the perfect Valentine for the apple of my eye. I envisioned it in our finished basement den, where most of the Mister's other signs have found a home. Apples, however, fit perfectly in our kitchen, and the punch of red is cheering, especially this winter. 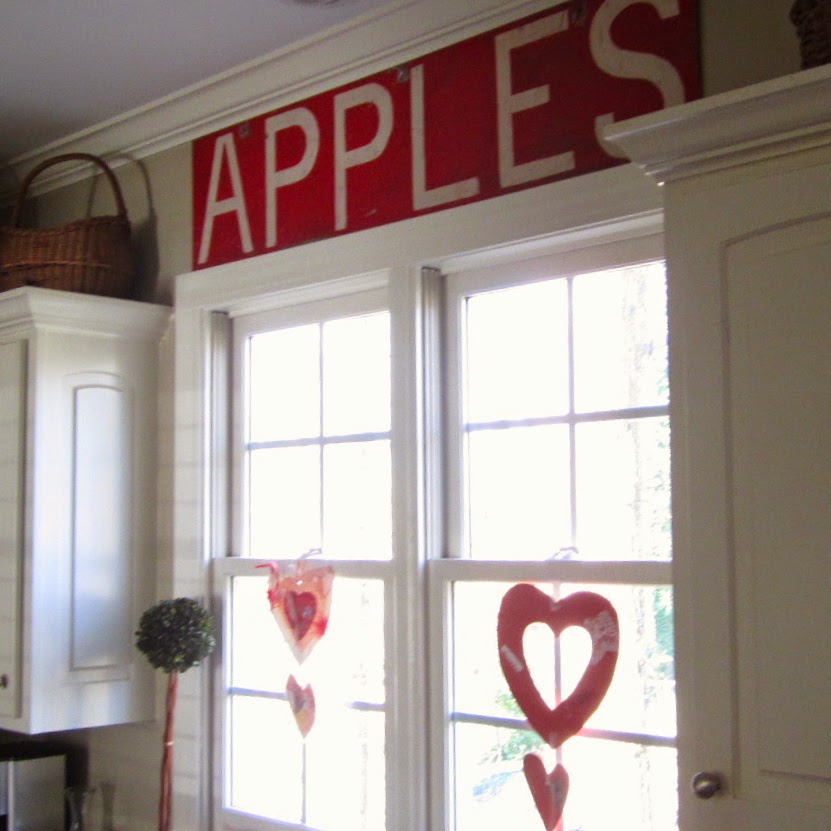 Keeping the Apples sign company are a couple of signs that the Mister found at an antiques mall on Amelia Island.  These signs are from an old A&P supermarket. Originally, they would have hung from the ceiling to help shoppers find specific items. We have another A & P sign that's marked Canned Vegetables, and it hangs on the wall above the pantry door. 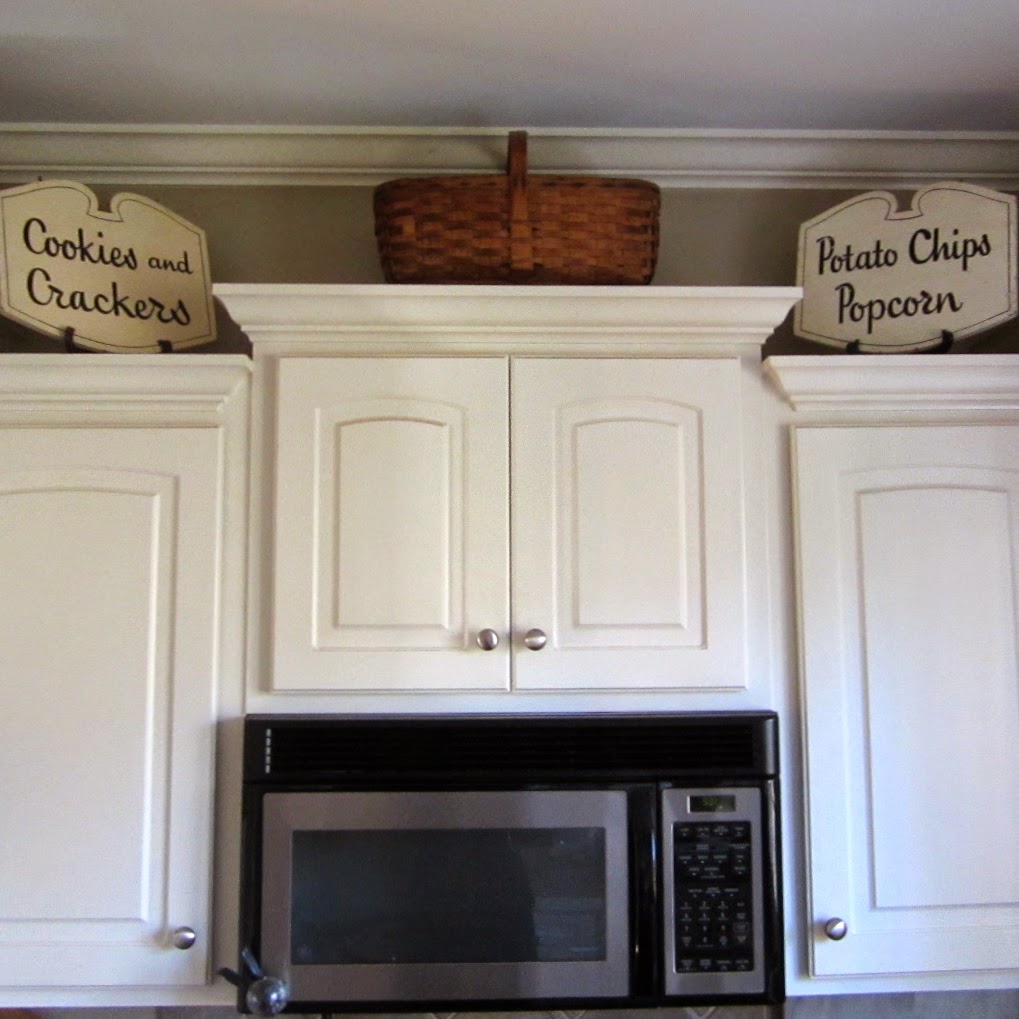 Occasionally, the Mister has added a sign to his collection that he simply found. For years, the Mister drove by this Bird Sanctuary sign and admired it. One of several in the Tangerine community of central Florida, this sign captured the idea of Old Florida for him, and when it at last rotted off its nail and fell to the ground, the Mister swerved off the road and scooped it up. The five of us were on our way home from church, and come to think of it, he didn't swerve off the road. When he noticed that the sign was not hanging in its usual spot, he stopped the car in the middle of the road, hopped out, and threw the sign in the back. I seem to remember that a discussion ensued. 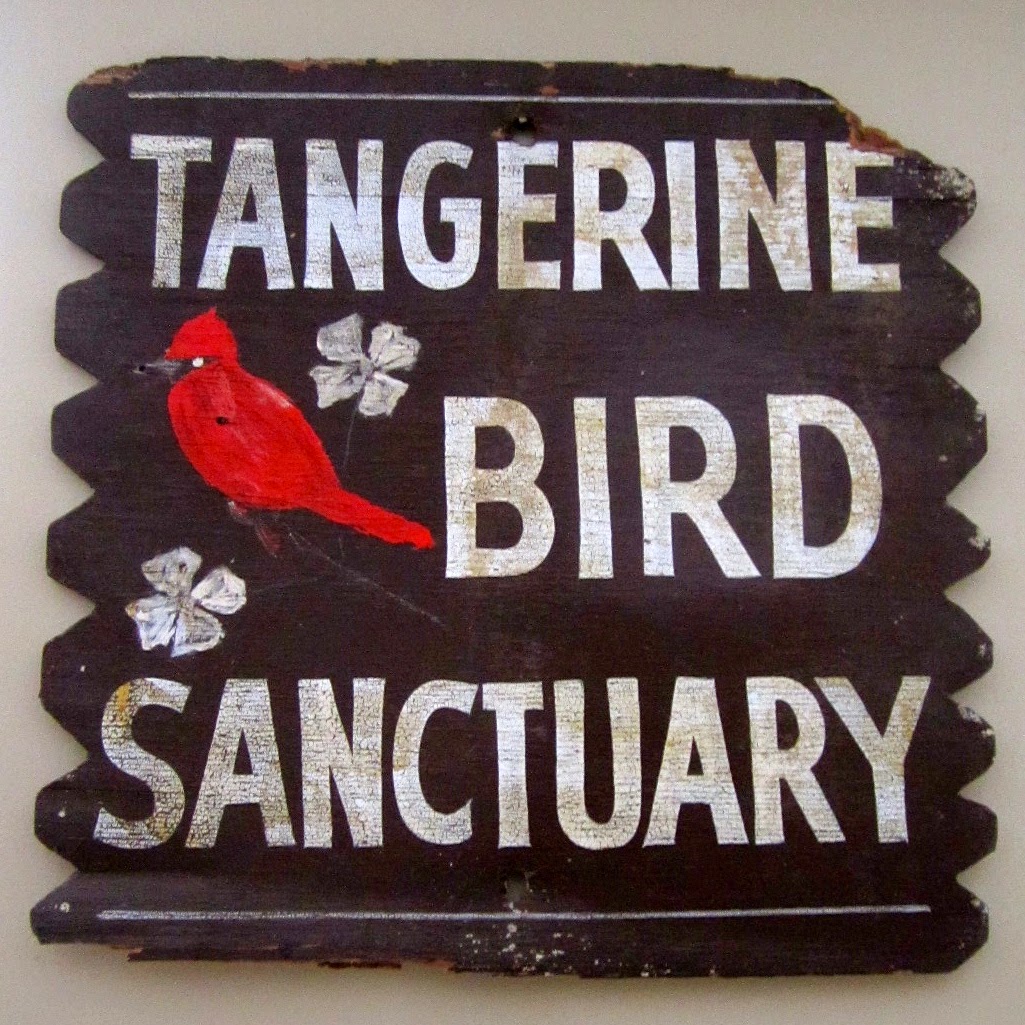 I found the Locust Lodge sign on an anniversary trip to Asheville.  I spotted it before he did, and he was so jealous. Luckily, it was very affordable, and not long after we were home, the Mister was researching Locust Lodge. As it turns out, LL was a boarding house/inn in Hendersonville, North Carolina. The Mister even scouted out its location and drove us by the decaying property months later. 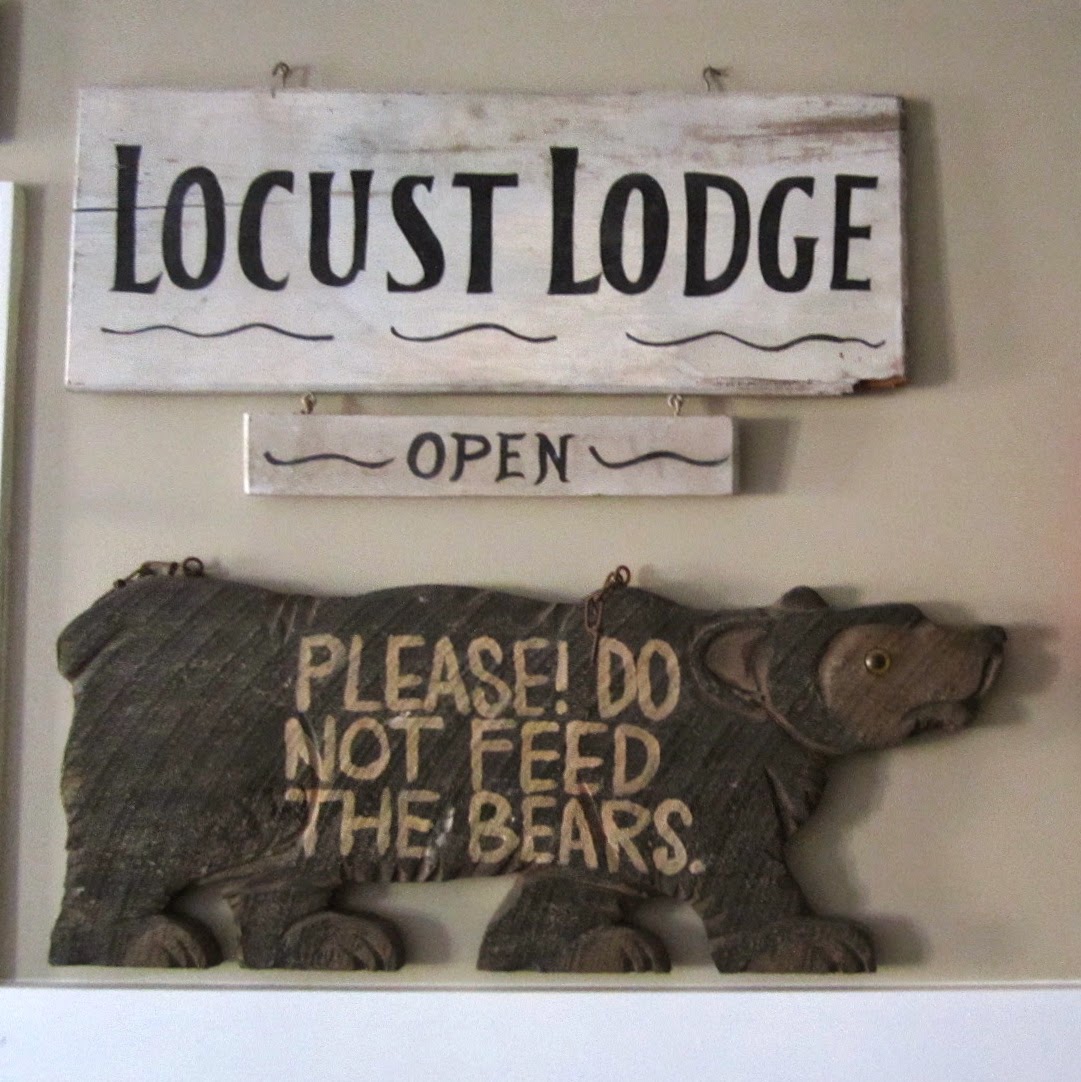 Okay, so we're not purists. Of course, the bear sign is new. We purchased this when Big was a tiny tot, and I thought it would be cute in his room. I do think it was locally made, so that's something, at least. 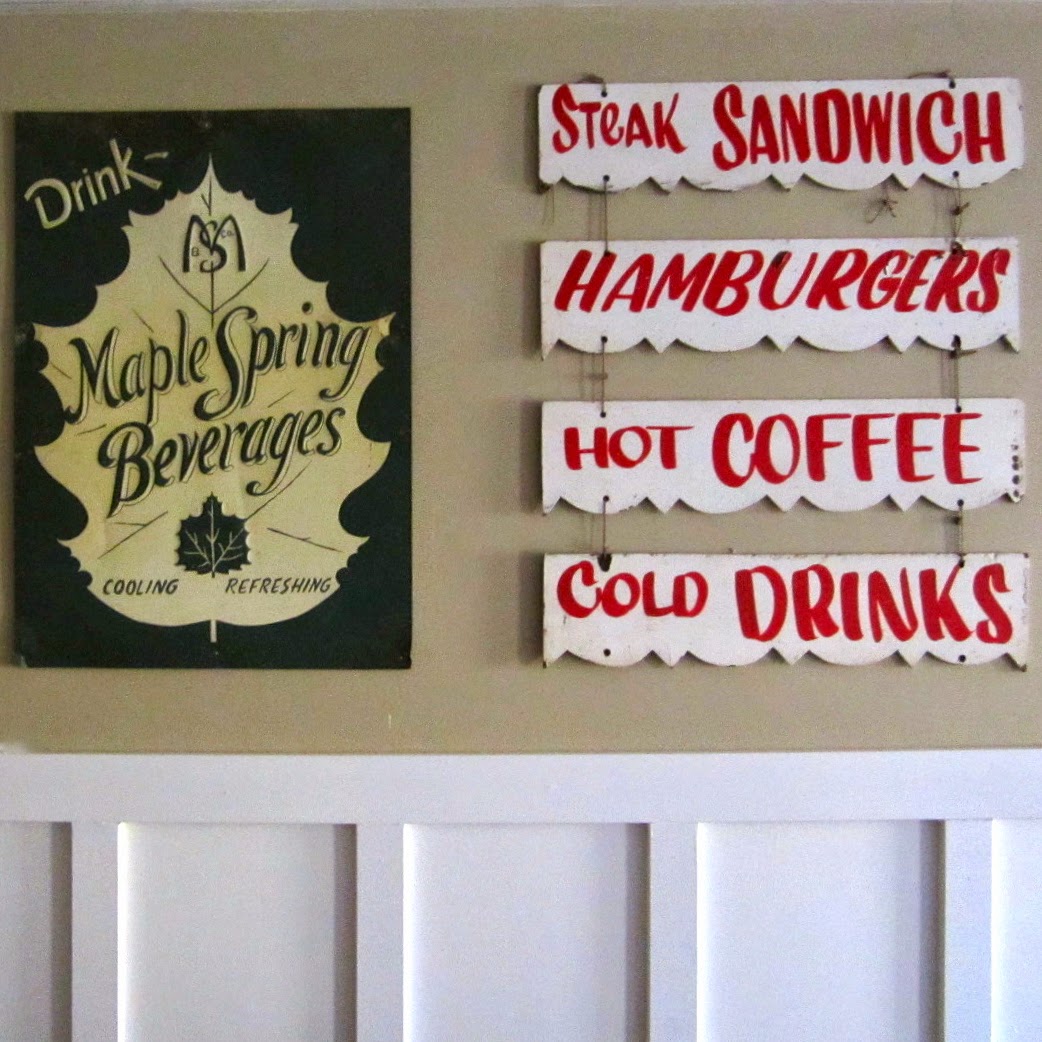 Our Steak Sandwiches sign is a fond reminder of a happy vacation trip to Maine. Maple Spring Beverages decorated the boys' room years ago and now hangs in the basement den/rec room/man cave. It's a metal sign, and may be a reproduction. If it is, it's a really good one. Honestly, I think it's the real deal, but you do have to be careful.

If you're interested in old signs, you can read about how to spot reproductions in this article from eBay. We really prefer old wooden signs, which are also manufactured today to look old. If you don't know a sign's provenance and you're thinking of purchasing it, the best advice I can give you is to love it whether it's old or not.

And, honestly, that's good advice for lots of other things, too!