Stars and Stripes and Summertime

After the season of snow and ice ends, I begin to measure the days by what's blooming. Daffodils, forsythia, tulips, irises, azaleas, and peonies make their appearances and take their bows, welcoming increasingly warmer weather. For my children, summer begins when school ends. The Mister's summer starts when he brings home a giant bag of Cowboy Charcoal and uncovers his beloved Weber grill. The calendar insists that summer doesn't begin until the solstice in mid June, and the retailers report that summer begins with Memorial Day sales. When I was a kid, I thought that summer began when Mother let us go barefoot in the grass. Now, of course, I know that when the hydrangeas set their tiny but vivid lime green buds, summer is close at hand. 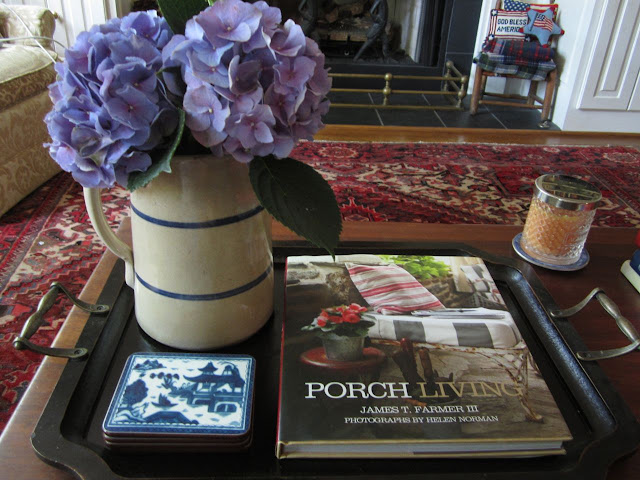 We had some April and May birthdays to celebrate with dear friends this past weekend, so I spent most of Saturday making the house look festive and ready for a summer of suppers on the deck, fun movie nights, and lazy weekend mornings (at least occasionally!). 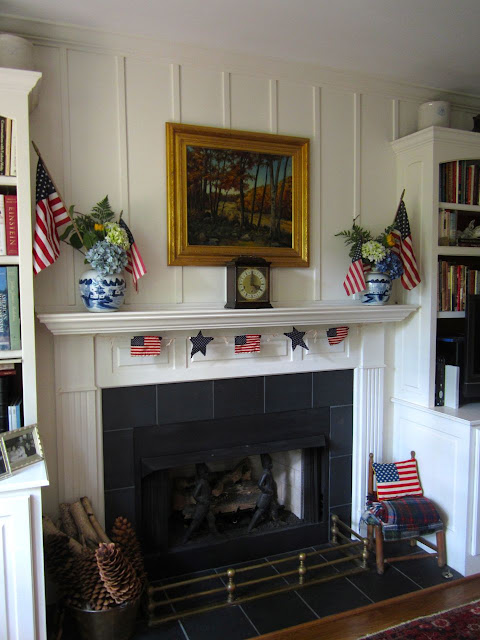 I like decorating with the American flag, but I try to be very careful not to be in any way disrespectful. The quilted flag-and-star garland below the mantel was something the Mister and I purchased on our honeymoon at (the sadly now closed) Balsams Resort in Dixville Notch, New Hampshire. Dixville Notch is where the first ballots are cast for each Presidential election, and I guess my young(er) self thought the garland would be a fun reminder of that. 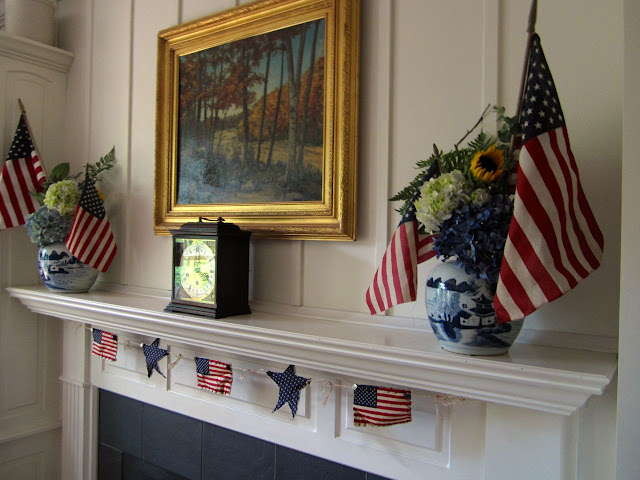 I bought a big Costco bouquet of hydrangea and sunflowers, which I mixed with some ferns and sticks from the yard and some parade flags to create the arrangements on the mantel. 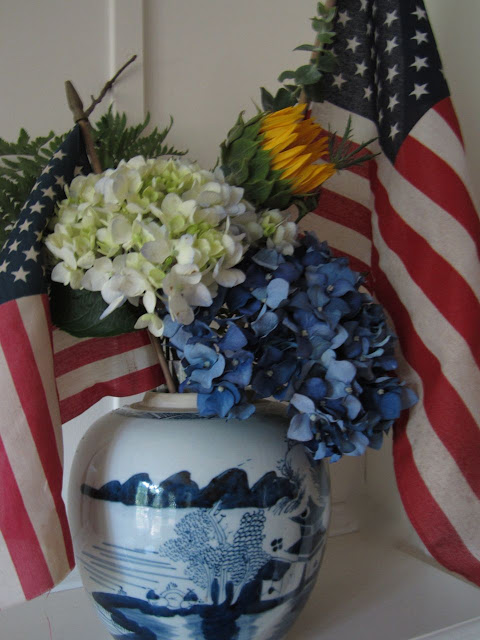 I try to look for older flags or those with a little wear whenever I go antiquing, but I have been known to dye flags in brewed tea to get the look I wanted. That's all I'm saying about that. 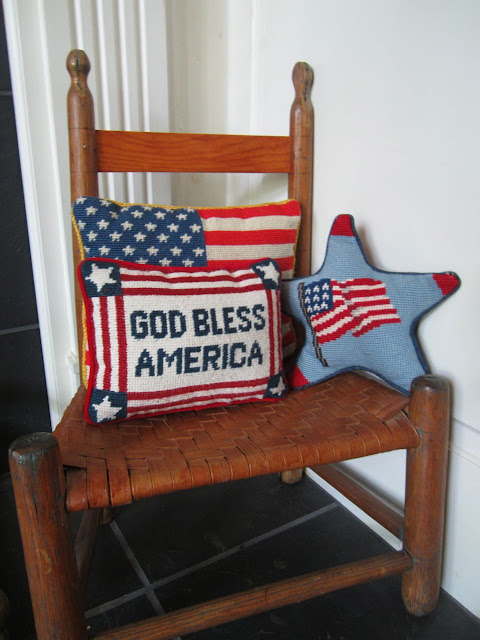 My eyes aren't really up to needlepointing much anymore, but I do love needlepointed pillows, especially. This little chair was made for my grandfather to sit in at his grandfather's funeral in about 1908. My grandfather was three at the time. 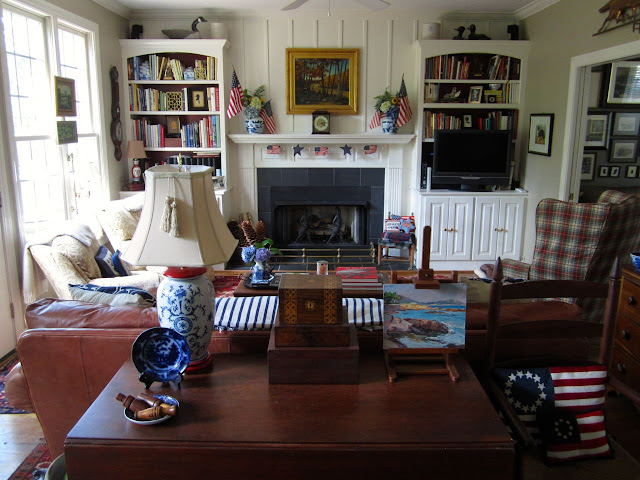 Here's the family room, looking from the sitting room end of the kitchen. I think I need to work a bit on the book shelves; they're looking kind of cluttered. 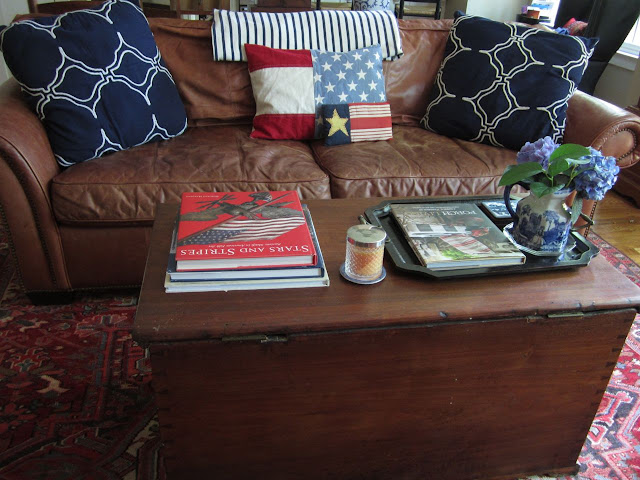 The sofa sports a little patriotic color as well. I found the striped cotton throw at TJ Maxx, and it is perfect for me to slip under when the kids have the ceiling fan on high and the AC on low. 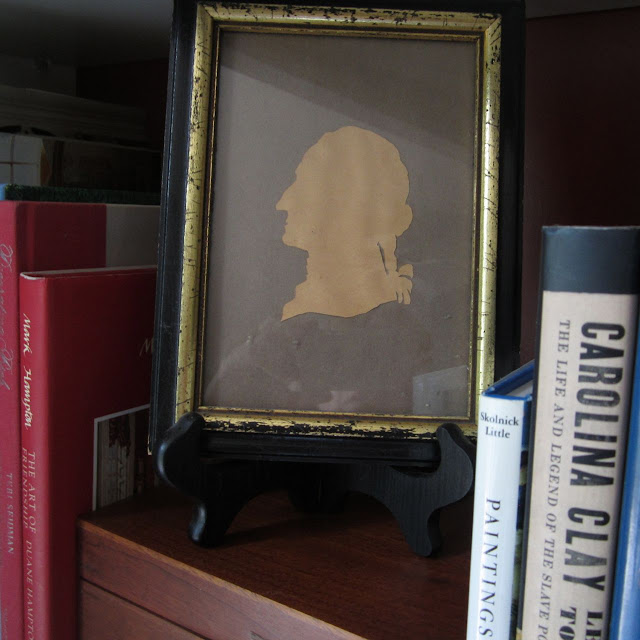 Of course, a simple silhouette of the Father of Our Country makes for a patriotic touch, too. 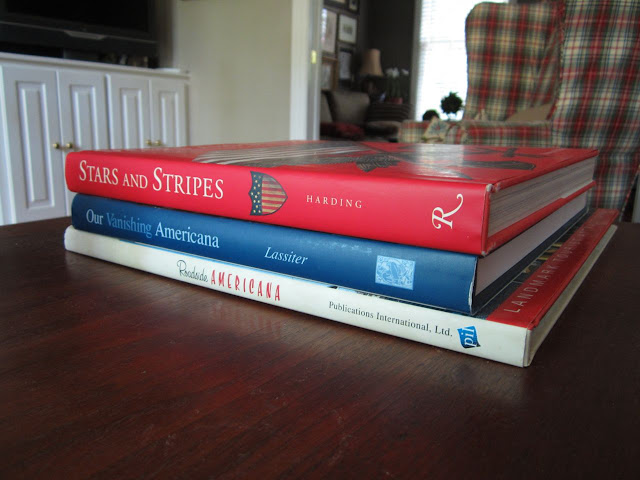 I pulled out a few Americana-themed books for the chest in front of the sofa. If you enjoy collecting or just reading about patriotic antiques, I highly recommend Stars and Stripes. 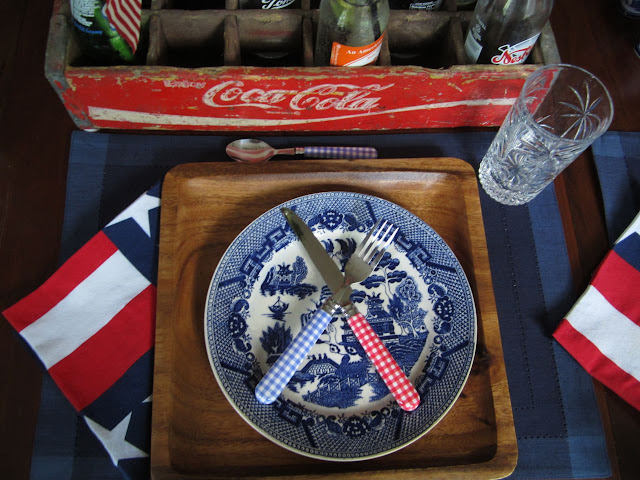 Our birthday dinner afforded us the opportunity for the first cook out of the year. My faithful Blue Willow dishes once again work into the color scheme. The gingham cutlery is from Target, purchased years ago. 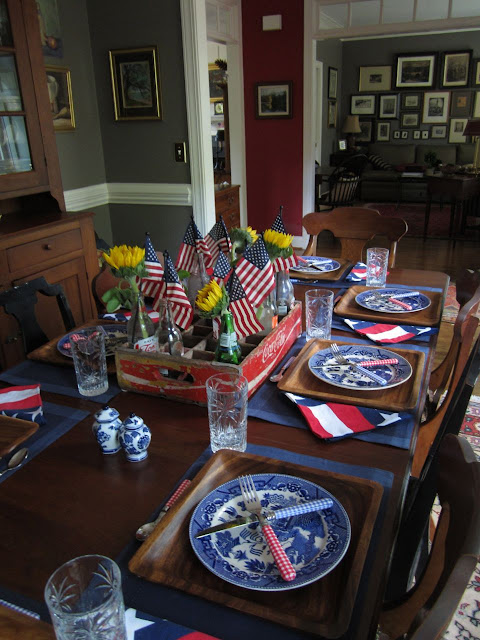 For the centerpiece I used a divided Coca-Cola crate that I bought this past January at Reninger's Antiques Market in Mount Dora, Florida. I think I paid $20. 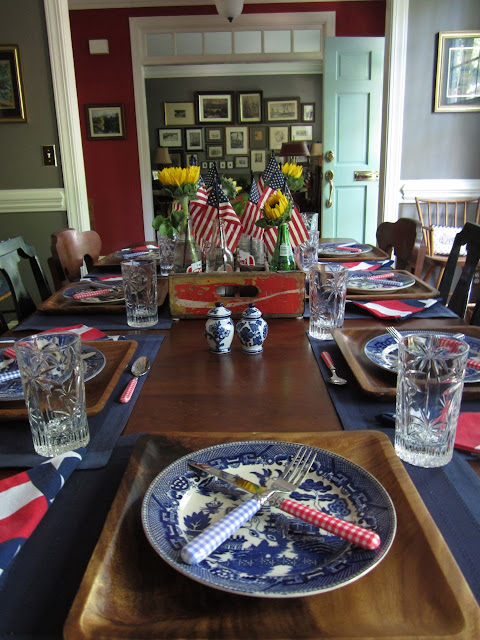 Sunflowers from the aforementioned Costco bouquet, dime store parade flags, and a few sprigs of basil made a fragrant (but not sweet) centerpiece. 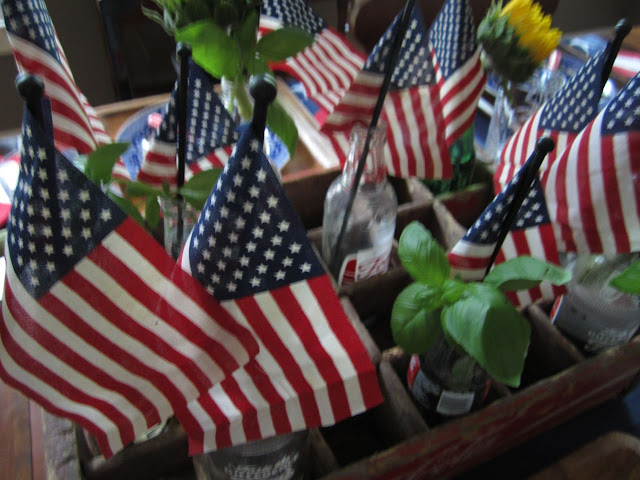 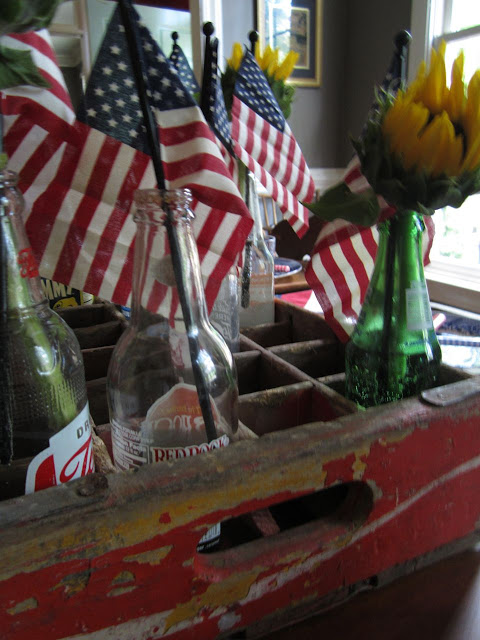 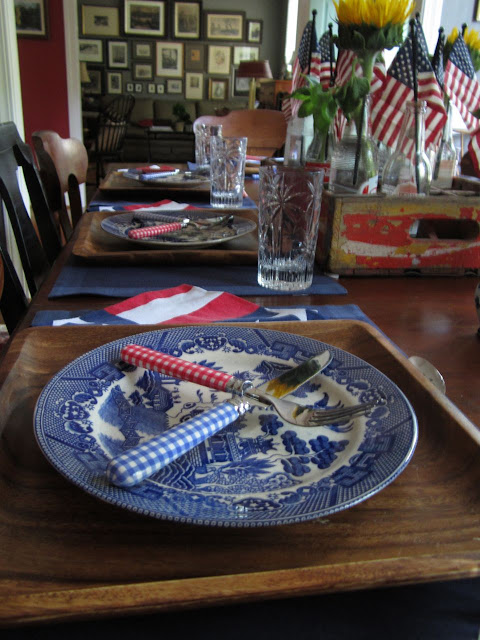 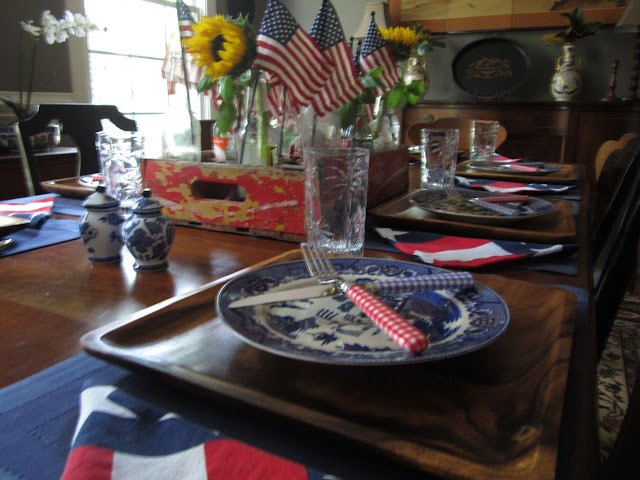 The square wooden plates/chargers are what we actually used for plates. They are my favorite dishes for steak or hamburger dinners. They are especially perfect when you are serving a large group and not everyone gets a seat at the table. 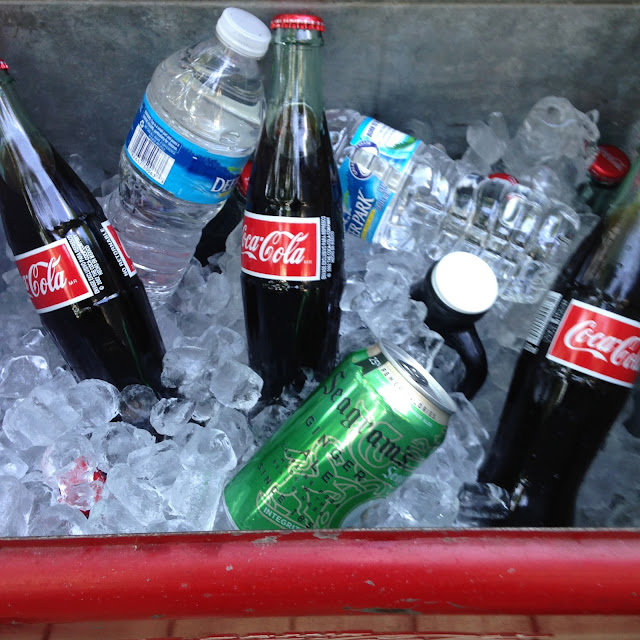 We had some drinks iced down in an old cooler on the deck. I think there might be a growler in there, too. 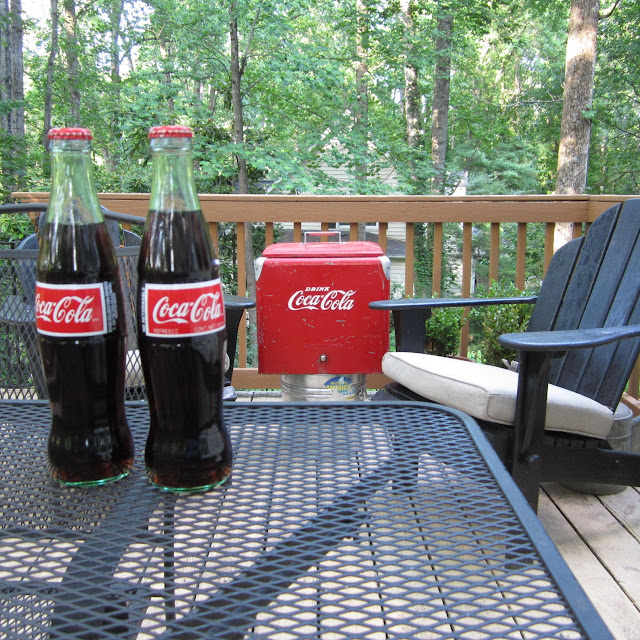 I took the above picture as an homage to Mad Men. (I know I really need to let it go. It's over.) 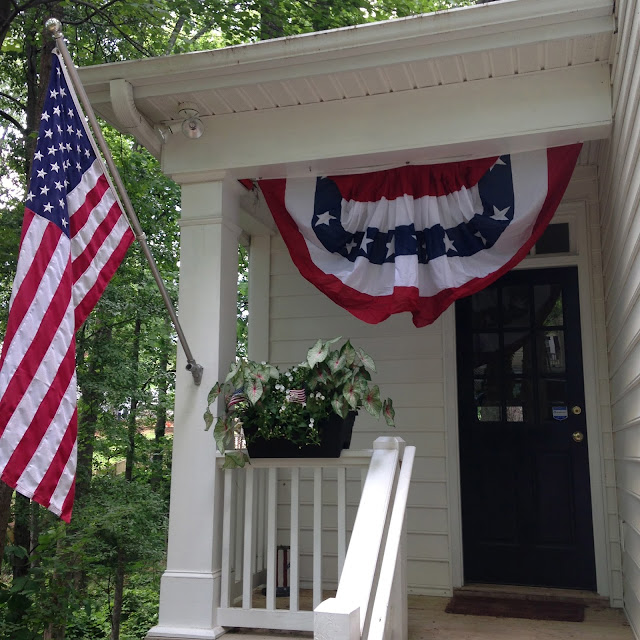 We made sure the outside of the house looked welcoming, too. Even the side porch got a little bunting, and I popped a couple of small flags into the flowerbox. 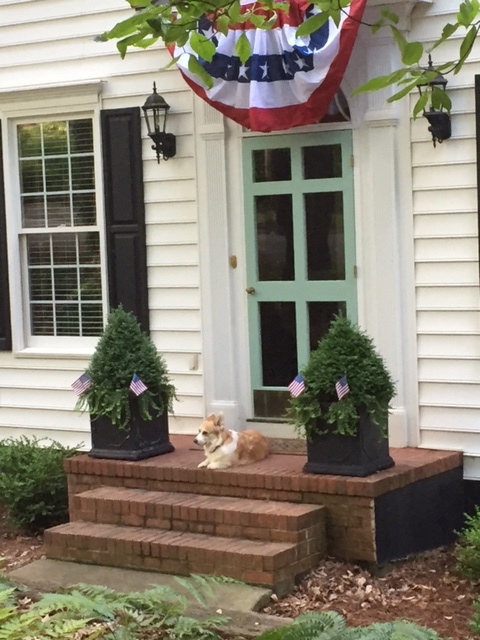 Her Royal Highness Charlotte waited to royally greet our guests. 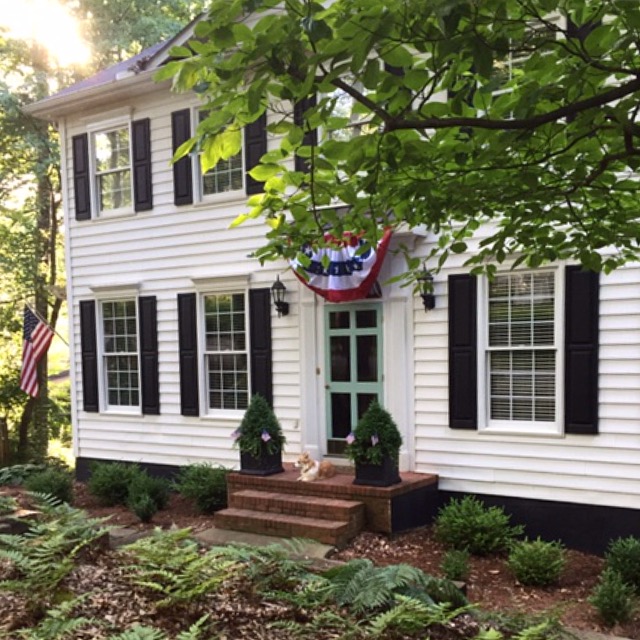 She's a bit of a Tory sympathizer, but we like her anyway.

She thinks summer starts when she gets her first Popsicle.
When does summer begin for you?