Hello again! I've missed you all, and I'm happy to be back to Town and Country House. 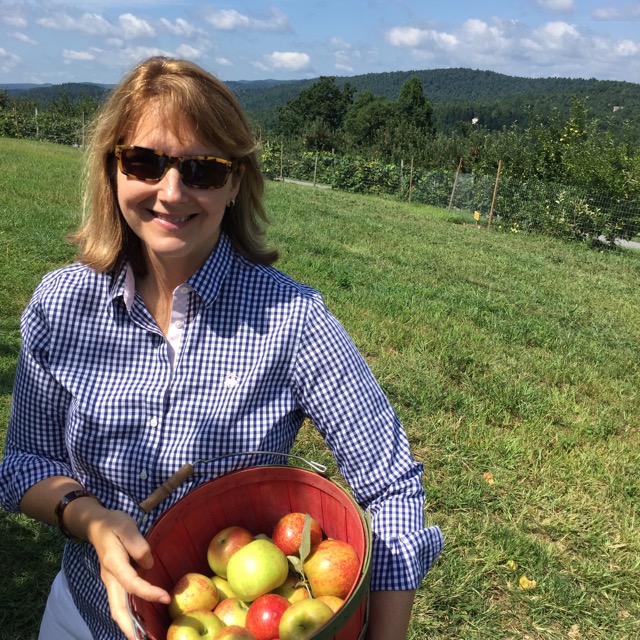 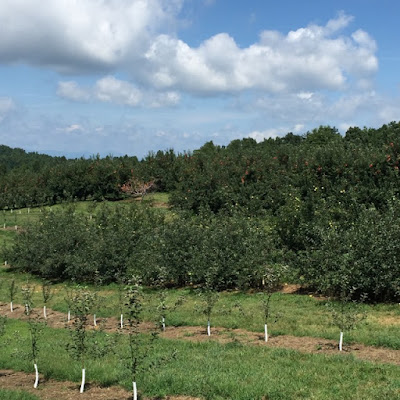 Several weeks ago, the Mister and I took a day off and headed for the nearby mountains to do a little apple picking. For almost 20 years, it's been a family tradition to take a trip to Skytop Orchard in Flat Rock, North Carolina. For years, we carried our three kiddos in backpacks and baby carriers, and then as they grew we hauled them up and down the hills in wagons. Later, we tried to keep up with them as they darted through the rows of trees, looking for fruit. Before we knew it, their long legs loped alongside us and their strong arms carried the apple baskets for us.  Last year was the first year that all five of us weren't able to go together. It's bittersweet as children leave the nest, don't let anyone tell you differently. 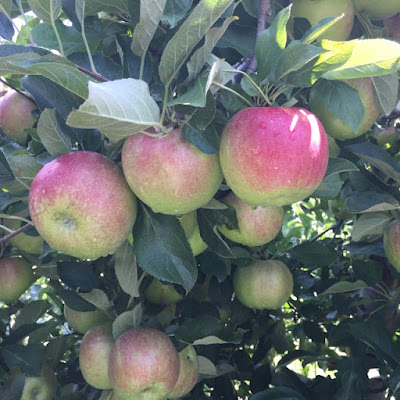 Nevertheless, the Mister and I decided we'd like to go apple-picking, even in our "childless" state. 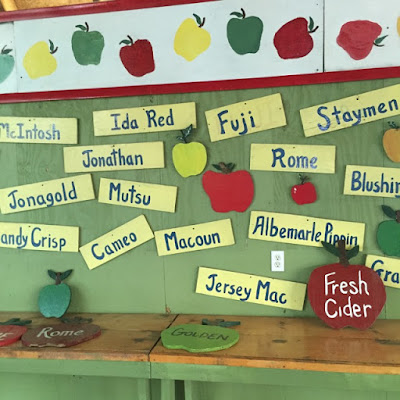 We were able to pick the last of the Honey Crisps along with Galas and Red Delicious. The earliest apples ripen toward the end of August, while the later varieties come in through September and October. 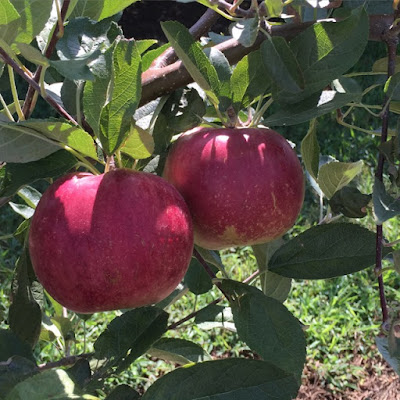 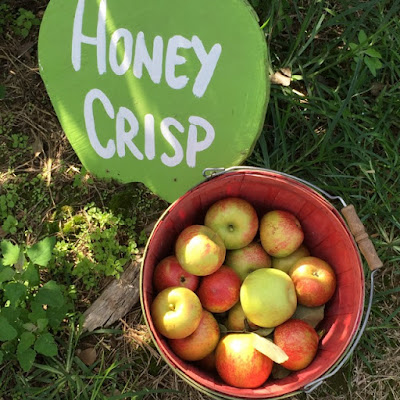 It was a breezy, low humidity day, and we practically had the place to ourselves.

After picking a couple of baskets full, we'd worked up a decent appetite and decided to try Hubba Hubba Smokehouse in Flat Rock, just down from one of my favorite shops, The Wrinkled Egg. 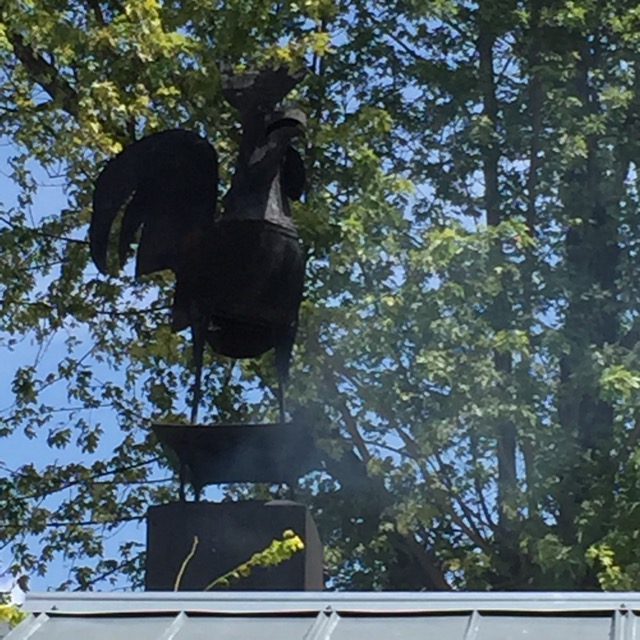 The fragrant wood-fired barbecue smoke was pouring out of this folk art chimney topper, scenting the outdoor seating area with a mouthwatering aroma. 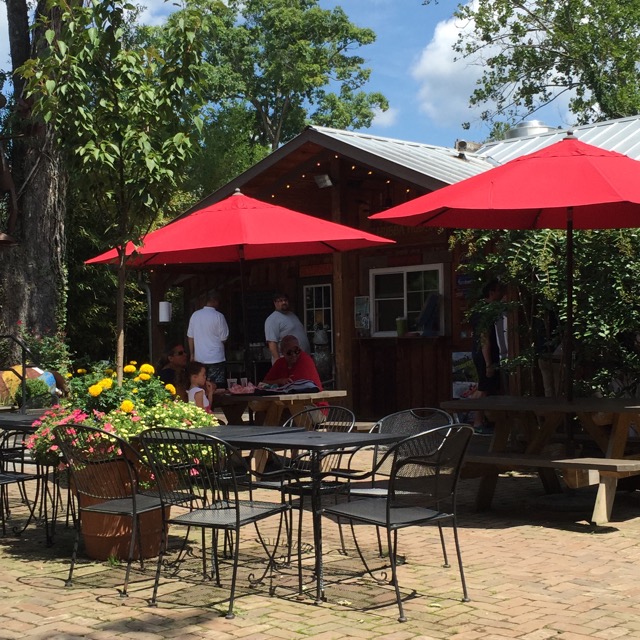 The container plantings were abundant and beautiful all around the patio. 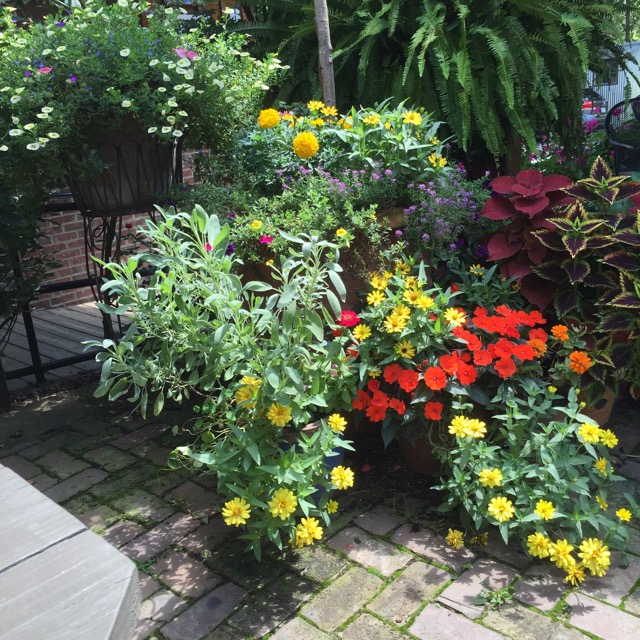 The Mister went for the chopped pork plate with baked beans, corn salad, and a cheddar biscuit. I confess that I talked him into a side of deviled eggs, which we shared. 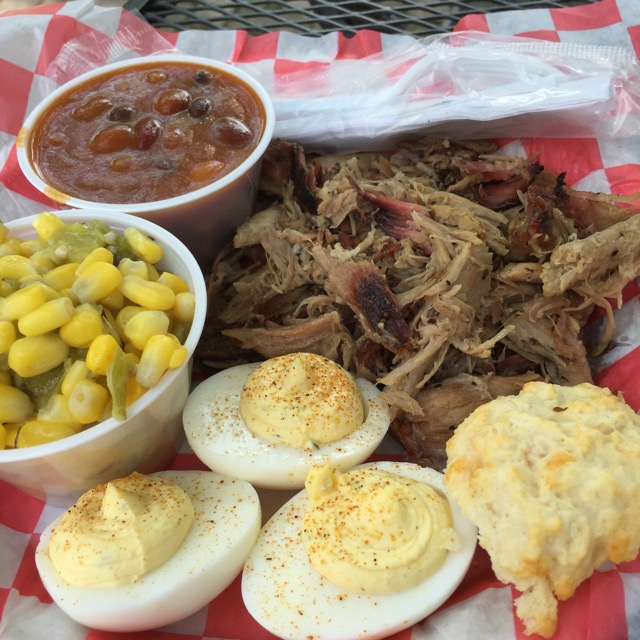 I had the Grits and Greens bowl. Pimento cheese grits topped with collard greens, pulled pork, and (fried) shoestring onions. Good thing we don't eat like this everyday! Mercy! 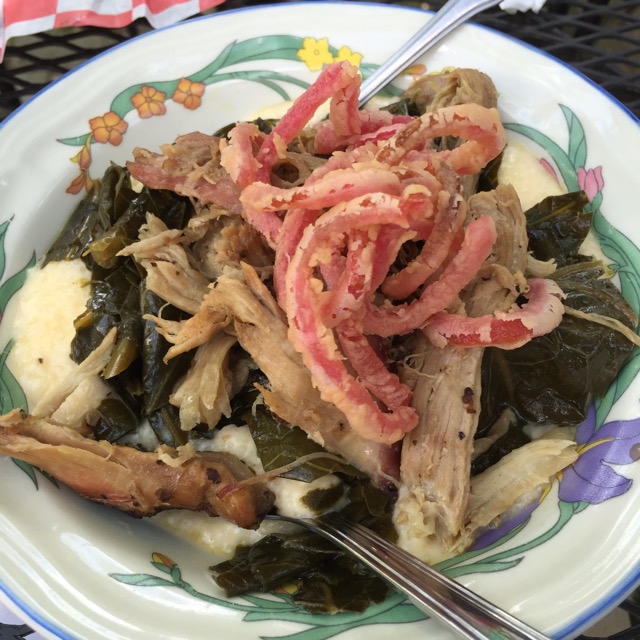 We would definitely return to Hubba Hubba Smokehouse. In fact, a couple of weeks later (with Big and Little in tow) we decided on the spur of the moment to return to Flat Rock for a day. This time we headed to Connemara, home of Pulitzer Prize-winning American poet and biographer Carl Sandburg. 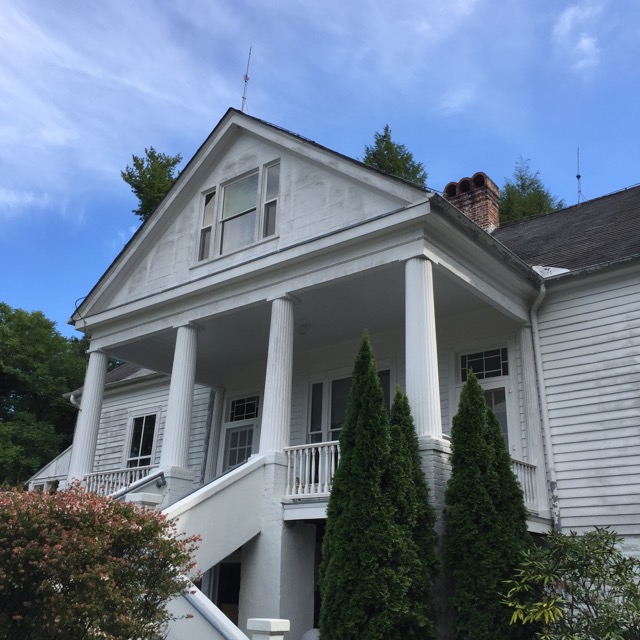 A National Park Service Historic Site, Connemara sits amid 264 acres in western North Carolina. There are miles of hiking trails along with a working dairy goat farm, begun by Sandburg's wife, Lilian "Paula" Steichen. Lilian was the younger sister of photographer Edward Steichen. He and Sandburg collaborated on several projects, including the blockbuster 1955 Museum of Modern Art exhibition The Family of Man. Steichen was director of photography at MoMA at the time, and is credited with establishing photography as an art form. 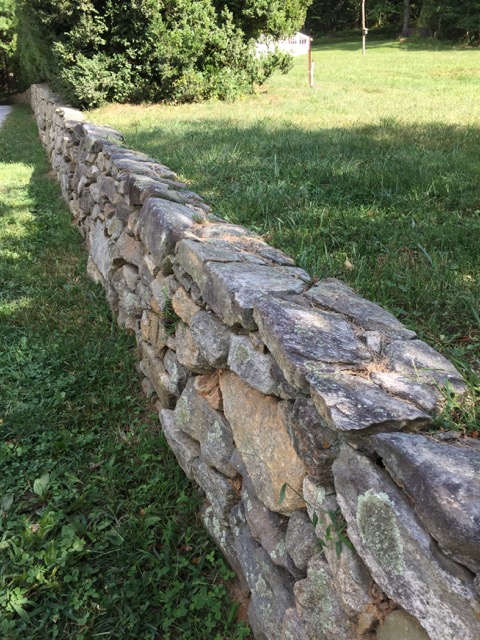 Sandburg died in 1967 and in 1968, Lilian Steichen Sandburg and the couple's three daughters turned the house and its entire contents over to the National Park Service. It is a remarkable time capsule and contains more than 325,000 archived letters, manuscripts, maps, telegrams, and sound recordings. Sandburg's library included more than 12,000 volumes! 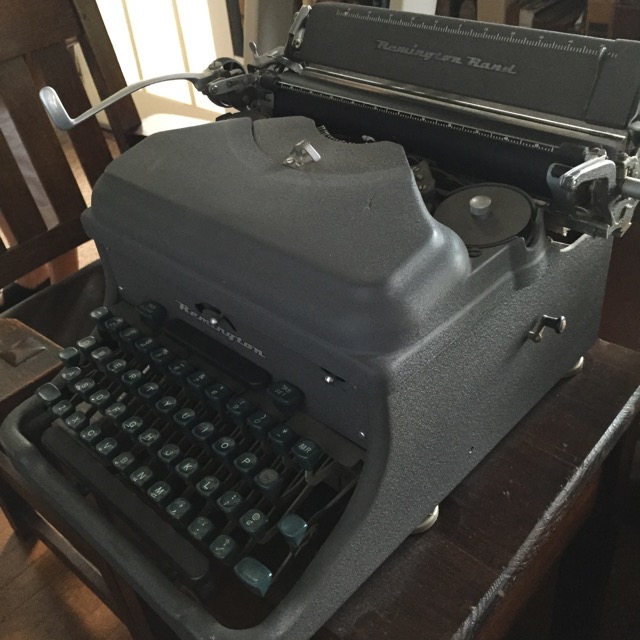 One of Sandburg's typewriters in his study. 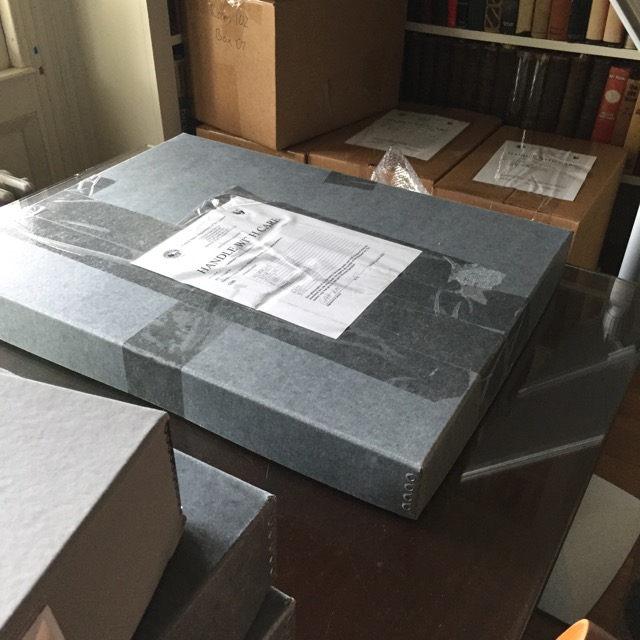 The Sandburg house was built for the Memminger family in 1836.  Although the property and main house have had some updates and additions over the years, the house will undergo intense preservation in 2016-2017, meaning that its contents are being packed and stored this year. It is quite an undertaking to pack and label more than 300,000 objects! 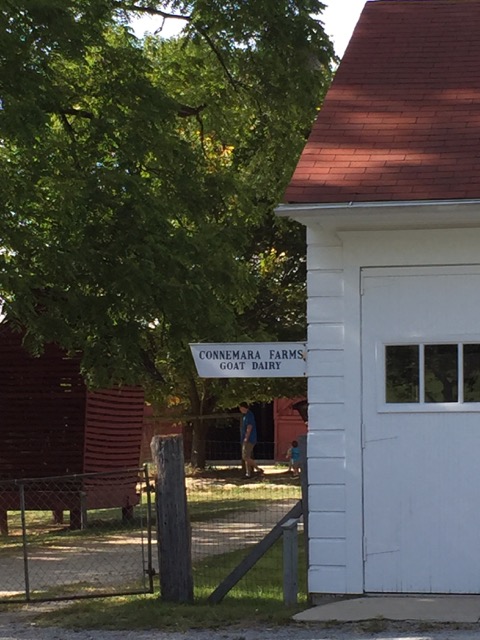 When our children were young, the goat barns were a highlight of a visit to Connemara. 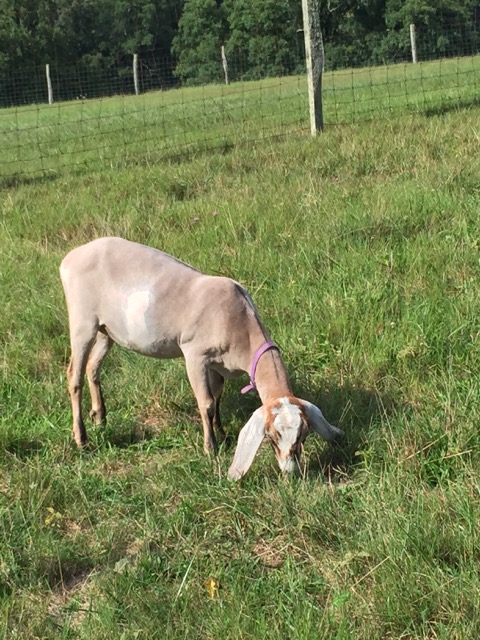 Each of these prized goats wears a collar with his or her name. They are well-tended, beautiful animals. 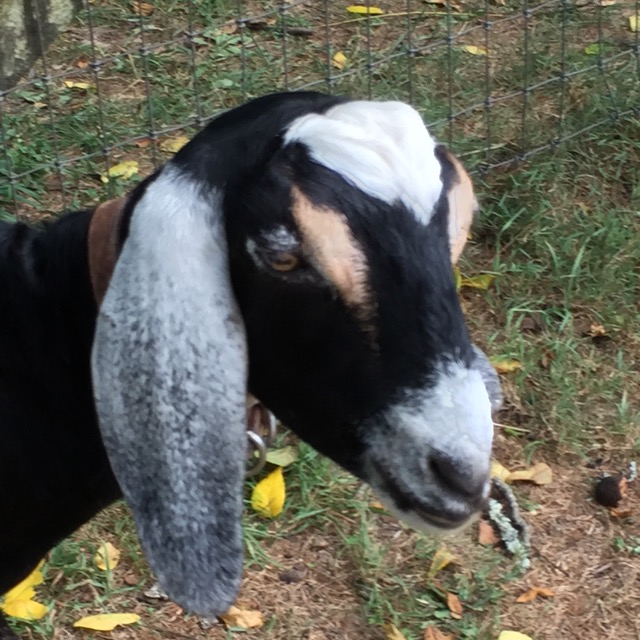 After a fun day in the mountains, baking something apple-y seemed like the right thing to do! 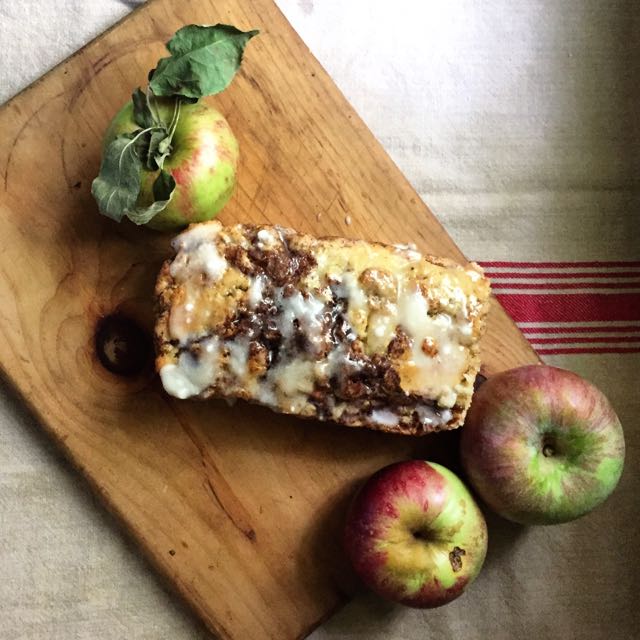 Bake 1 hour or until cake tester comes out clean. Let bread cool in pan on rack.

Melt butter in heavy small saucepan. Whisk in remaining brown sugar, then milk. Whisk until smooth and add remaining 1 tsp of vanilla. Spoon topping over cake in pan and allow to stand about 15 minutes. Carefully turn loaves onto platters and pour remaining topping over. Let stand at least one hour before slicing.