Last-minute Thanksgiving Flowers on the Cheap!

The clock is ticking, but it's not too late to put together some pretty, fresh and cheap flowers for your Thanksgiving table without breaking the bank! I just placed an order to have some flowers sent to someone as a Thanksgiving surprise, which left my "flower budget" very, very low. The good news is that the Mister texted me a photo of some flowers at Aldi for $3.99 a bouquet. I chose two bunches--one of roses and one of mums. Aldi (the "brother" grocery store to Trader Joe's) is new in our neck of the woods, and I'm pretty impressed with the savings to be had on staples. The flower bouquets, however, were small and not really anything special. The good news is that I like a challenge, especially when it means taking something kind of ordinary and making it a little bit great. 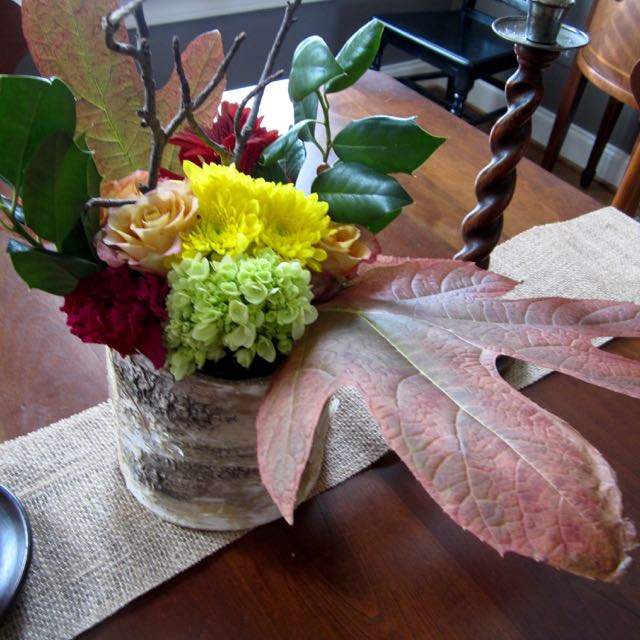 So I started with these two birch bark containers that I had on hand. These simple guidelines will work for any small container with a wide opening. 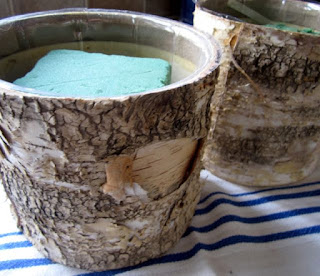 I soaked some Oasis foam for about a half hour and then placed the blocks in the containers. 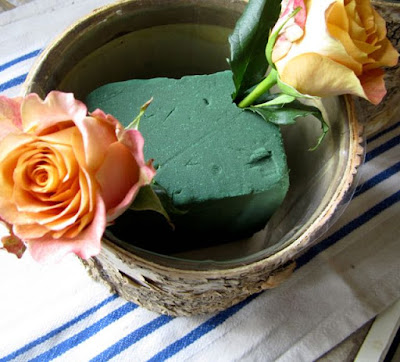 I'm no master flower arranger (I don't even belong to a garden club!), but I really love messing around with flowers. Thankfully, I've had the opportunity to watch some stellar art museum volunteers prepare for museum openings and events using a combination of grocery store flowers, yard flowers, and a few florist stems. As with any good design, balance is important. So I started with one rose on either side of my container. 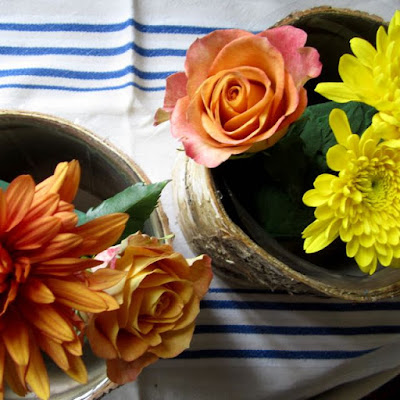 Then I added one large mum to the center of each container. Most grocery store bouquets have three or four striking blooms and the rest are smaller flowers. Keeping that in mind, I place the larger or different colored blossoms first. My bouquet had two big orange mums, one small green hydrangea bloom, two dark magenta carnations, and three or four small yellow and rust-colored mums. And I had six peach roses. 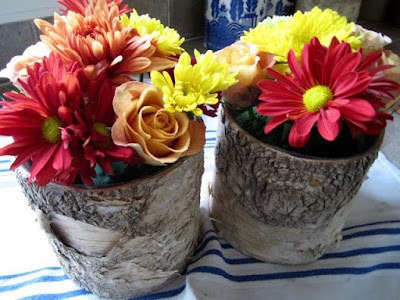 So, once the bigger mums were in place, I added the other flowers, working in threes as much as possible. The photo above shows how the arrangements looked at this point. Not that great, right? The colors worked okay, but the textures and heights are too similar. This is when it starts getting fun for me. I headed out to our side yard to look around and see what might work. The pros call this foraging. 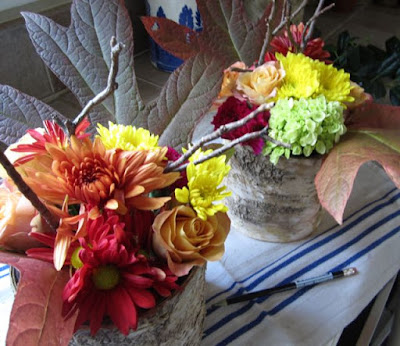 I decided the beautifully colored leaves of our oakleaf hydrangeas would add some of the drama I needed. The leaf stems are kind of wimpy, so I used an old pencil to poke a hole in the Oasis and then inserted the leaves. If you're like me, you might be thinking, those leaves are gigantic--totally out of scale. Yes and no. It's the unexpected size of the leaf that makes the whole arrangement more interesting and a little less like something you'd expect to see on tables at the retirement center. 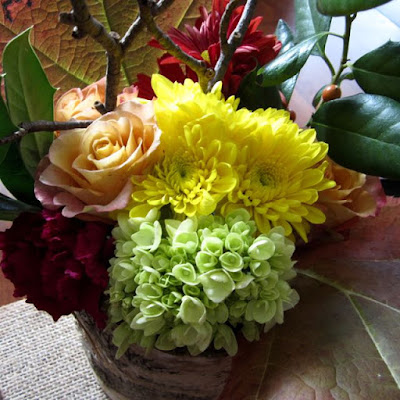 Even with the giant leaves, the overall texture was still too soft, and the arrangement needed a little height. So, I added a few bare sticks and a couple of small stems of holly. The dark green and the shiny surface make a nice counterpoint to the softness of the other petals. The berries aren't quite red yet, and the slightly orange-ish tint made the holly a terrific choice today. Magnolia stems or even boxwood would have the same effect of adding some structure and contrast. 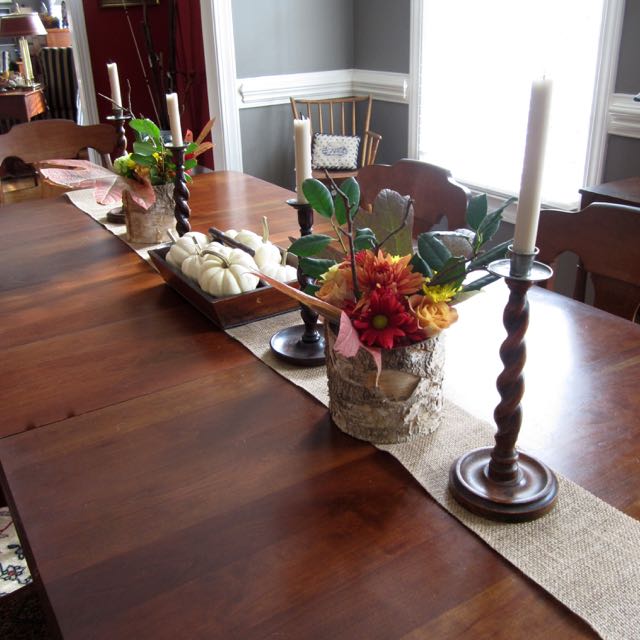 So, here the arrangements are on the table. I'm going for a more casual look this year, and will add placemats and heavy pottery dishes, so Big and Middle can load their plates as full as they'd like!

Almost finished, but I still felt like the arrangements needed a tiny tweak. So, I returned to the yard and snipped a few wispy Hemlock branchlets to add yet another texture. 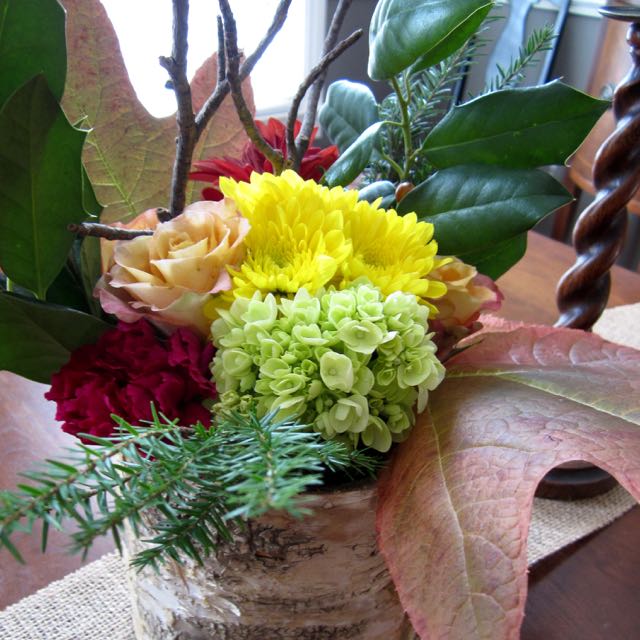 I also like that the evergreen holly and hemlock foretell of the Christmas season ahead.

So, there you have it. It took me about an hour from start to finish, including photography, and a cash outlay of only $8--definitely the best (not-even) $20 I spent this month!

Whether you're headed over the river and through the woods or just into the next room, I hope you have a wonderful Thanksgiving celebration with people you love.

Enter his gates with thanksgiving and his courts with praise; give thanks to him and praise his name. Psalm 100:4