This time last year I was packing up our house to prepare for our down-to-the-studs renovation in our kitchen, family room, and master bath as well as the addition of a screened porch. The family room wasn't originally part of the plan, but that's a post for another time.

The kitchen was where I really had to plan and scheme, and, yes even fret, to stay in our footprint and budget and to get the function and look I wanted. I love a challenge like this, though, so despite some occasional frustration with my client (aka me!), I enjoyed the process. 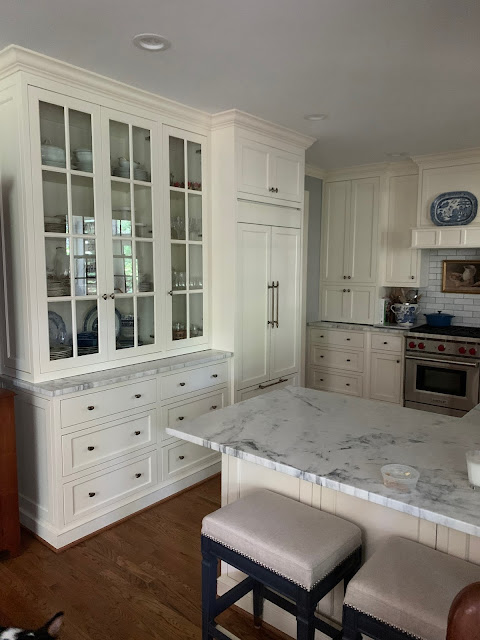 A key "want" of mine was honed marble countertops. There are dozens--maybe hundreds--of blog posts, articles, and showroom sites that compare various types of countertop materials and their pros and cons. I read most of them and took notes from a lot of them in the months leading up to our start date. One of the most helpful things was visiting a sweet friend's kitchen, where I was able to ask questions about cleaning, and she explained how she maintained her countertops and also how they had acquired some "character." (I seem to remember that her daughter's boyfriend and salad dressing were among the culprits.) 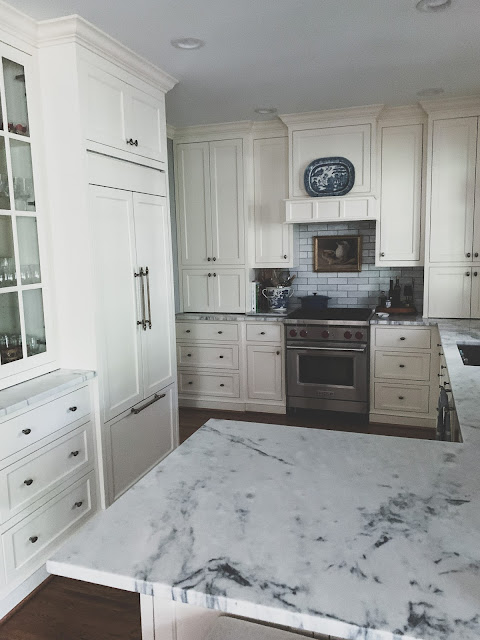 My countertop is Super White honed marble, which I believe is quarried in Brazil. It wasn't my first choice, but it turns out that the natural stone market is unpredictable, and unless you have loads of time and loads of money, you may have to, um, adjust expectations.
After a few trips to a couple of stone yards in our area, we decided that Super White would work for our kitchen. We ended up choosing our slabs from Pacific Shores, which has showrooms all over the U.S. The rep that I talked with on several occasions was really helpful--primarily because he explained that I shouldn't rule out a particular slab because of what I saw as a "flaw."
You can see in the slab below that there's a sort of mass of gray in the lower right corner. I had ruled out this slab because of that, but he assured me that my fabricator would be able to either "hide" that part under some cabinetry or simply not use it. Similarly, I was sure that the large wave of gray just to the left of center would look like a tropical storm was headed our way--that's just what it reminded me of. The fabricator thought that was hilarious, and then he taped out the slab according to our kitchen plan, so that I could see that darkest part would be left out. I shaded the "unused" portions in purple, so you can also see where the sink went. 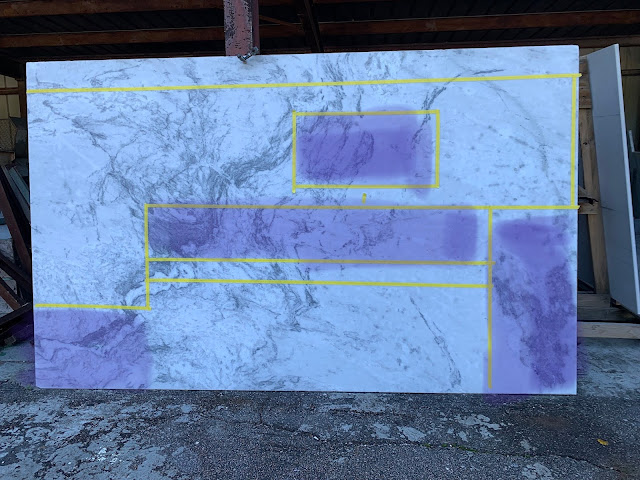 For our project we needed two slabs to do the kitchen and the master bath countertop and shower bench. Now, I know from various comments and dms on Instagram that lots of you want to know if I would choose marble again, and I would!
I tend to be kind of perfectionist, and a few people advised me against it because it's soft and it can stain. That's all true, and if my children were little, I might have to re-think it, but I absolutely love the patina and the character of real marble. Tom is possibly not the neatest person, and he routinely (daily) accidentally splashes a little coffee on the counter and leaves it. It wipes right up. I often cook with lemons and tomatoes and vinegar and wine, and I have had no staining. I wipe the counters down each evening with warm water and a dot of Dawn dish soap, and that is it. About every two weeks, they get a good cleaning with a light spray of stone cleaner.
It's not all roses, however. I do have a slight chip on the edge of my sink where our clock fell off the wall and nicked it. And the one seam that I had to have has grown wider because (we think) the cabinets have settled a bit on one side. The stone fabricator has been notified, and I'm confident that they will make it right. It's just annoying, and, of course, it's hard to get them out for such a small job when they are swamped installing multi-million dollar kitchens, but I'm persistent.
Meanwhile, it's been nine months with the "new" kitchen, and every morning when I turn the corner from the stairs, I am happy to see that marble.
Hope you have a lovely day! Thanks so much for reading!